“Don’t Smoke in Your Shower,” Ridge Jokes on Colbert (With Video) 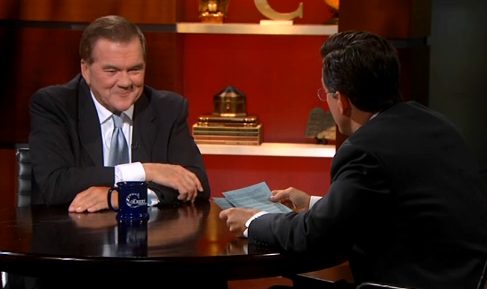 The interview focused largely on allegations that hydraulic fracturing, aka “fracking,” is responsible for methane contamination in well waters. Colbert showed the now famous footage of a man lighting his water faucet from the film ‘Gasland.’

“In September of 2010, the EPA warned residents of a Wyoming town where fracking was taking place to use fans while showering to avoid the risk of explosions,” Colbert noted. “So that proves there’s a work-around. Just install a fan in your showers and…”

The former Governor went on to explain that while methane has turned up in well water, there has been no conclusive evidence to suggest that hydraulic fracturing is to blame.

“Yes it is happening to some water supplies, and it has absolutely nothing to do with hydraulic fracturing,” Ridge said. “Methane gas is naturally occurring. They’ve had methane gas, speaking as a Governor, in some of our water wells in Pennsylvania long before any frack wells were located next to them.”

The Governor also disputed that he was a lobbyist for the gas industry, clarifying that he was an consultant to the Marcellus Shale Coalition.

“Since it’s my first time on your show, I hate to correct your first question, but I’m not a lobbyist,” said Ridge. “Pennsylvania is sitting on top of something I think could lead a Renaissance in America with regard to energy, not only in terms of creating jobs, but making us more secure and less dependent on foreign sources.”