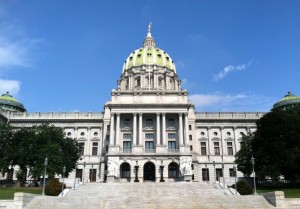 The ruling is in, and there won’t be a voter ID requirement for the 2012 election. Good Morning Politicos, here’s the buzz.

Hats off to the PLCA for a great gridiron last night!

Voter ID Ruling: Court Grants Temporary Injunction: For all intents and purposes, Pa.’s new requirement for voter ID is on hold for 2012. A Pa. judge issued a preliminary injunction Tuesday, ruling that no voter can be turned away for a lack of photo identification.

Scollo Goes on the Air (Watch Video): Democrat Phil Scollo, the man challenging Rep. Tom Marino (R-Lycoming), is out today with his first television ad. He doesn’t go for subtlety.

AG Update: Kane Presses RSLC Case; Freed Gets FOP Backing: Kathleen Kane, the Democratic candidate for Attorney General, has kept on the attack over an ad from a national Republican group. Meanwhile her Republican opponent Dave Freed picked up the endorsement of the Pa. Fraternal Order of Police.

HD-177: Ed Rendell continued his endorsement spree, this time backing William Dunbar over Rep. John Taylor (R-Phila). “I’ve been following William’s campaign and know of the determination and fight that he has to be successful so he can bring about the necessary change needed for the progression of this state. Pennsylvania needs a public servant who can bring that same fight and determination to Harrisburg; and the citizens of this great state deserve it,” Rendell said.

South Central
Patriot News: An outline of how difficult it can be for some to acquire their state-issued Ids
Intelligencer Journal: Those on both side of voter Id bill satisfied
Intelligencer Journal: Local experts expect the Romney campaign to use the upcoming debate to refocus his image and message for the election