We’ve got a month left until the election. See who made it count this week… and who didn’t.

Dave Freed. This up arrow goes to the Republican running for Pa. Attorney General in an alternate universe. “I condemn this ad and ask the RSLC to take it down. I want this race to be about experience, not throwing mud,” said Freed, who was not later accused of lacking moral authority, upon learning of a controversial ad against opponent Kathleen Kane.  That Dave Freed knew that the group would just keep running the ad anyway, so he’d still get to enjoy the benefits of the ad without any political damage. He continued, “Like Ms. Kane said during the primary, Pennsylvanians deserve an Attorney General who is experienced. I’ve convicted hundreds of criminals and overseen the prosecution of over 20,000 cases. She’s been to trial just a few dozen times.” He also was not made to look bad in a TV news segment on WHTM, nor worse in this one on WNEP.

Voter ID. The law faced a major (though not unexpected) setback this week when a judge ruled that poor implementation posed too great a risk to the right to vote of those who presently lack photo ID. He granted an injunction preventing the law from taking effect in 2012. An appeal is unlikely between now and election day. In the long run though, it looks likely that the requirement will be in place in 2013 and onward.

PLCA. This year’s gridiron was awesome – gangnam style. The annual event raises money to pay the stipend of summer interns for Pa. Legislative Correspondents’ Association. It’s happenings are off the record, but we feel comfortable printing that fun was had by all, and that the presentations – particularly by Gov. Corbett and Sen. Daylin Leach – were hilarious.

Roxy’s Cafe. The Harrisburg eatery triumphed this week as Pa. Health Secretary Eli Avila announced his resignation, egg still on his face. Avila tangled with the restaurant early in his tenure in 2011 when he accused the owner of serving him an improperly cooked breakfast sandwich. He later, it appears, reported them to his own agency. Roxy’s sued, saying the allegation cost them a contract. The scrap(ple) was the most notable part of Avila’s tenure.

Phil Scollo. The long shot challenger to Rep. Tom Marino (R-Lycoming) found out the hard way this week that being a candidate means you have no privacy. Scollo, a businessman, owes tens of thousands of dollars in tax debt, several northeast Pa. papers reported. He said the debt is related to medical expenses for he and his wife. A sympathetic explanation, certainly – but not sympathetic enough to blunt this lede in the Citizens Voice: “Democratic congressional candidate Phil Scollo conceded Monday he faces federal and state liens of more than $44,000 for failing to pay income taxes and potential foreclosure on his home.”

We brought in a ringer this week, Dave Weigel of Slate. He had this to say about Obama’s punchy performance, one day late for the debate:

At speech in Colorado, President Obama tells Americans that the jerk store has run out of Mitt Romney.

A significant improvement from PoliticsPA’s amateur attempt at the same reference 20 minutes earlier in response to Chuck Todd.

The liberal blog Keystone Politics wins it in a walk this week. They posted this story about its “Pennsylvania’s Worst Campaign Photoshop of 2012” award. They solved the case of Rep. Rob Kauffman (R-Franklin) and the missing puppy. Take a look: 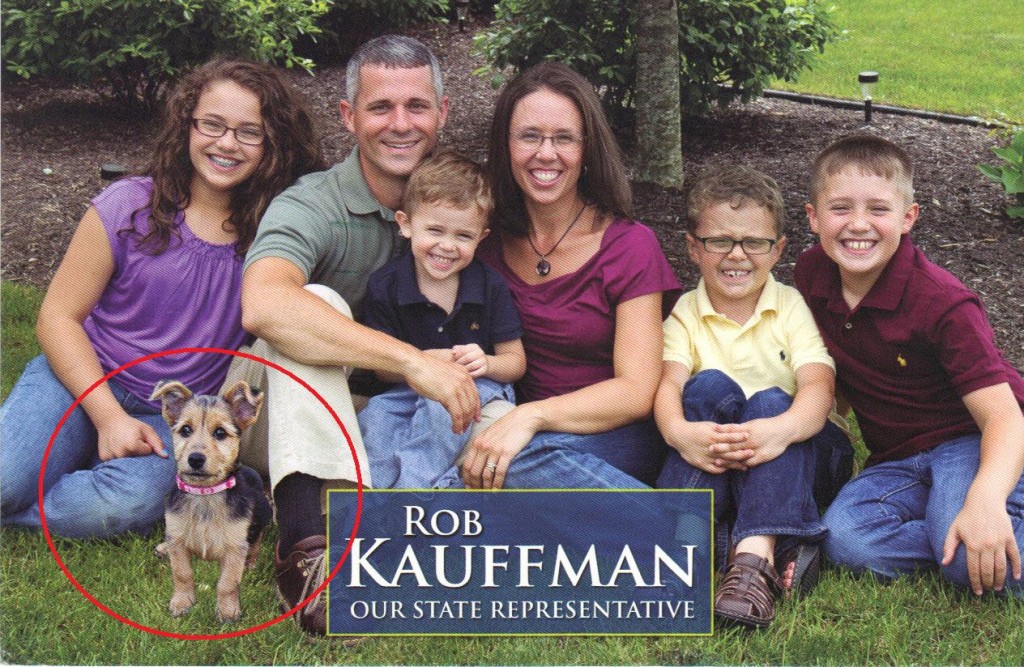