Here it is: our final Ups & Downs list before the election. We’ve got a massive list for you today.

Pa TV stations. Finally! It took months, but Pa. has finally achieved its natural battleground status. Stations will see over $20 million in revenue for the final week of the campaign. In Congress, PA-12 is the number 1 district in the USA as far as outside spending. At the presidential level, it’s a one-sided battle: Republicans are spending $11.8 million to Democrats’ $1.6 million. The downside for the GOP? Many swing voters in eastern Pa. still don’t have TV back from Sandy.

Rob Teplitz. The Dem running to replace state Sen. Jeff Piccola (R-Dauphin) had the momentum – until this week. After weeks of pounding Republican candidate John McNally on education cuts (McNally said in the GOP primary he supports Corbett’s budgets, in the general he said he didn’t), McNally turned the tables. He’s hammering Teplitz for his “support” of a commuter tax on people who work in Harrisburg (75% of voters in SD-15). Teplitz didn’t actually support a tax, he just said it should be on the bargaining table… until McNally started attacking him. Then, he flip-flopped and said he’d always opposed the tax. The result? For the past week the conversation has been about Teplitz and a commuter tax.

Pa. Pundits. PoliticsPA was just putting the finishing touches on this feature, a conversation with some of our state’s top political commentators, when the TV spending blitz began. All of a sudden, PA feels like it’s in play again!
.
.

Kathleen Kane. The Dem AG hopeful looks like she’s going to seal the deal. Even the latest poll from the Pittsburgh Tribune-Review shows her up by double digits over GOP opponent Dave Freed. On top of that, another outside group is up on TV in southeast Pa. with a $600K buy slamming Freed.
.

Tom Marino. No one blames anyone for cancelling events – like the debate between the freshman congressman and his Democratic challenger Phil Scollo – as superstorm Sandy tore through Pa. But after the storm passed (and mostly spared PA-10), he refused to participate in another debate citing scheduling conflicts. It’s a far cry from Marino’s loud complaining about debates in 2010. Down in PA-6 and PA-7, areas harder-hit by Sandy, both GOP incumbents debated yesterday.

PoliticsPA has been tracking newspaper endorsements. In some races, they’ve been even. But in others, the preponderance of editorial boards have chosen one candidate or another. Here are some Ups & Downs based on those endorsements:

Bob Casey. The first step in winning newspaper endorsements? Meeting with ed boards. Casey has; Senate challenger Tom Smith has avoided the bright lights and scrutiny. As a result, Casey swept all of Pa.’s premier papers – even the Tribune-Review – due to his handle on the issues and congenial, bipartisan style.

John Maher. The Republican for Auditor General argued during his primary that he’d have a better chance to net paper endorsements. That was important, he said, because in a low-key race like this they matter more. Well, he was right. All of Pa.’s premiere papers backed his candidacy, citing his leadership passing the state’s first open records law and his accounting background.

Rob McCord. The incumbent Treasurer did a good job of defending his record (and, for that matter, explaining his job description). He got every big Pa. paper except the Tribune-Review.
.
.

The party took longtime Obama adviser David Axelrod up on his offer to shave his mustache if the President loses Pa.

We just delivered shaving cream and razors to @ofa_pa HQ to make sure Axelrod keeps his promise after Romney wins PA twitter.com/PAGOP/status/2…

The State Rep., Auditor General hopeful and reigning “Humane Legislator of the Year” sent animal lovers into a tizzy with this photo, celebrating the passage into law of his bill banning the use of gas chambers to euthanize animals. 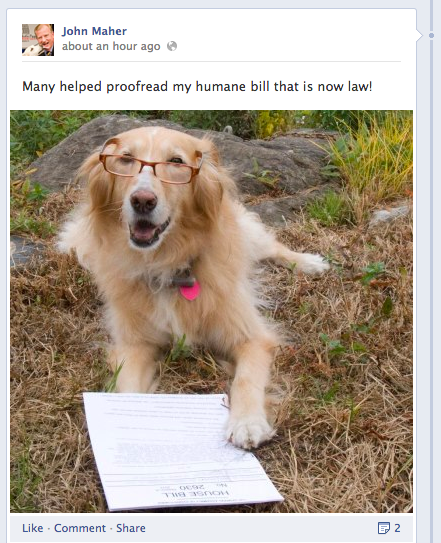