Looking to purchase some function of state government? This is your week! Are you a state legislator? Then not so much.

Congrats to Kathleen Kane, Eugene DePasquale and Rob McCord, all of whom were sworn in this week.

Grand bargain. Things are happening! It looks like the stage is being set for a big, all-at-once arrangement to tackle some of the most-debated issues in state government. First Gov. Corbett began his push to privatize the operation of the lottery. Next surfaced his plan to address transportation funding by axing a $1.9B tax break on wholesale gasoline (making Dominic Pileggi happy). Now it’s looking like he’s preparing to launch a blitzkrieg on state ownership of liquor stores (making Mike Turzai happy). Throw in anticipated pension reform plans, and 2013 could be a busy year.

Per Diems. Congratulations state Rep. Dom Costa! You’re the face of Pa.’s massive legislator reimbursement arrangement. The Allegheny County Democrat amassed the most – $55,495 – in per diem payments for the 2011/2012 session – though he isn’t alone by a long shot. All told it cost taxpayers $3.9 million over the past two years. Lawmakers who travel to Harrisburg for work get money for food and lodging but are never required to turn in receipts. Rep. Dan Truitt (R-Chester) has introduced a bill to create a private sector style, turn in receipts system. We’ll hold our breath.

Joe Waters. The Philly municipal judge and former police captain remains the sole Democrat (that we know of) in the race for Pa. Superior Court. He dodged a bullet when Philly Bar Foundation Prez Wendy Beetlestone decided against a bid. “After exploring the possibility of running I have decided that this is not the right time,” she told PoliticsPA. A second Philly name on the ballot would have hurt Waters and opened the door for a western Pa. candidate. The Republicans in the race so far are attorney Vic Stable and former Washington County DA Steve Toprani.

Cherelle Parker. The Democratic state Rep. from Philadelphia was found guilty of drunk driving this week, stemming from a 2011 incident involving a state-owned vehicle. She’s appealing the verdict based on the details of the arrest, but the damage of such headlines cannot be undone.

Luke Ravenstahl. The Pittsburgh Mayor had two good news items this week. The first came from his camp: he has $781,000 cash on hand – more than twice his nearest opponent. The second is from another camp: Michael Lamb. The City Controller launched his mayoral bid on Wednesday, forcing anti-incumbent voters to choose between two candidates (he and City Councilman Bill Peduto).

Tweet of the week: Melissa Daniels of the PA Independent. Yuk yuk yuk.

Covering the Camelot PMA has been a lotto fun. #imsorry

Bonus! We just saw this, and it is tied for tweet of the week. From entertainer J. Elvis Weinstein:

Yoko Ono took a tour of gas drilling sites in PA to protest fracking.Suddenly she’s against breaking up rock groups.

Facebook post of the week: Allentown Mayor Ed Pawlowski, for this selfie from his attendance at President Obama’s gun control presser. 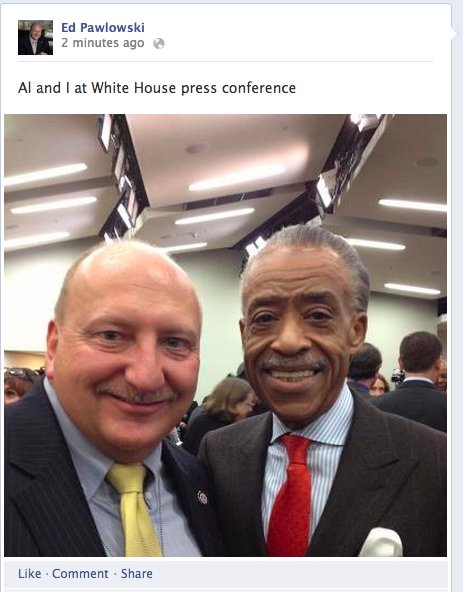