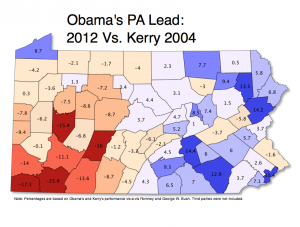 One more Pa. race has been called, PoliticsPA grades the pollsters, and maps of how Obama did in Pa. versus 2008 and John Kerry in 2004. Good morning politicos, here’s the Buzz.

Don’t forget to check back later for the Election Ups & Downs!

Maps: How Obama Stacked Up in Pa. Vs. 2008 and 2004: Take a look at which Pa. counties gave President Obama his biggest drop from 2008, and where he overperformed John Kerry.

Grading the Polls: GOP pollsters were proved way off the mark on Tuesday in Pennsylvania as elsewhere. Here’s a look at the internal and independent polls of Pa. races and how they compared to the final results.

Bonner Concedes to Micozzie: And then there were 3. Democrat Seamus Bonner conceded his challenge to Rep. Nick Micozzie, the Delaware County Republican said Thursday.

Shuster Driving at Transportation Chair: Rep. Bill Shuster announced the he will seek the chairmanship of the prominent Transportation and Infrastructure Committee – a post his father and predecessor Bud Shuster held during the 1990s.

HD-131: The race between Rep. Justin Simmons (R-Lehigh) and Kevin Deely is still outstanding. Simmons says he’s up outside of the margin that leftover provisional ballots could change; Deely is raising money to fund a recount effort.