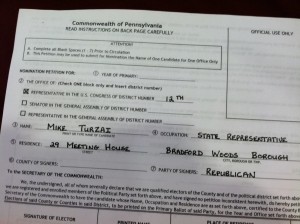 Those awful, time consuming, irritating petitions begin going out today, so get excited for your inbox to fill up with invitations for signing parties. We, on the other hand, are excited for the fact that no potential candidate, no matter how coy, can equivocate about whether they’re running once its set to paper.

Keystone XL: Last Wednesday, President Obama announced he would not grant a Presidential permit to begin building a pipeline through the nation’s heartland. In the time since, Pennsylvania Democrats and Republicans have come out to criticize the President.

Steelworkers Endorse Critz: One of the biggest labor unions in the new 12th district, the United Steelworkers, came out for Rep. Mark Critz today in his primary against his colleague Jason Altmire.

WashCo Commish Gets in Vs. Murphy: Washington Commissioner Larry Maggi announced his bid for Congress. He’s the strongest Dem challenger yet to Murphy, but his best shot is if Murphy loses the GOP primary.

Altmire on Giffords: Congresswoman Gabrielle Giffords announced Sunday that she will be stepping down from Congress this week. Giffords survived a near-fatal gunshot wound in January 2011 in an attack that left six dead.

HD-116: Democrat Ransom Young has announced a bid against freshman Rep. Tarah Toohil in the Luzerne County district. Young, 57, a life-long resident of Butler Township, owns and operates a fourth generation family farm. He has been a member of the Butler Township Board of Supervisors for 28 years.

HD-134: Berks County attorney Jim Smith (R-) has announced his bid for the now-vacant seat of Rep. Doug Reichley, who now serves on the bench in Lehigh County.