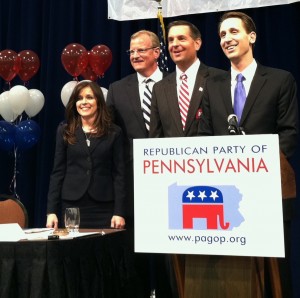 Good morning politicos, and welcome to the Buzz. If you couldn’t make it to Republican state committee this weekend, you missed quite a show.

After strong pressure from Gov. Corbett and his team, the party endorsed Steve Welch in the Senate race, thereby ending the primary. Just kidding. Literally every other candidate – as of today – remains in the race. Tim Burns said Saturday he would stay in, about a 170 degree reversal from his pre-state committee position. He’s likely ticked off about the Guv’s impressive last-minute vote-whipping effort, which you can read about here.

Meanwhile, everyone is still waiting on the Pa. Supreme Court’s ruling on redistricting.

Urban for Congress in PA-17: Luzerne County Councilman Stephen Urban, who made headlines last year when he switched from Republican to Democrat, is circulating nominating petitions for U.S. Congress. He would face incumbent Rep. Tim Holden and Democratic primary challenger Matt Cartwright, an attorney from Scranton.

$40K on Hand for Feinberg: Former congressional staffer Evan Feinberg raised just $50,000 so far in his Republican primary challenge to incumbent Rep. Tim Murphy (PA-18). This is in comparison to Murphy’s $200,000 he raised in the third quarter of 2011, the latest filing available for the congressman.

Bud George to Retire: Longtime state legislator Rep. Camille “Bud” George, D-Houtzdale, who represented parts of Centre County throughout his nearly four decades in office, announced Friday he will retire at the end of 2012.

Another Dem v. Kelly: Democratic attorney George Schroeck has announced his candidacy against Rep. Mike Kelly. He joins psych prof Missa Eaton in the Dem primary. Let’s hope he makes the ballot… ‘Schroeck’ would make for an interesting write-in campaign.

Legislative Election Updates
Note: these will be chaotic until we have a better idea of the final maps so bear with us.

SD-19: Former Rep. Tom Houghton had announced a primary against Sen. Andy Dinniman, but if the old lines stick he’ll be back in Sen. Dominic Pileggi’s district.

SD-31: Dem Susan Spicka, one of the challengers challenged by the redistricting mess, said she wouldn’t challenge Sen. Pat Vance.

HD-50: Bill DeWeese defiantly declared his bid for re-election, saying, “I am confident that by [the petition deadline], the battery of politically motivated missiles aimed at me by Gov. Tom Corbett will have been defused in the courtroom setting.”

HD-74: Longtime Rep. Bud George will retire, giving the map-drawers a handy district to cut. If the old lines stick, however, its a sure pickup for the GOP.

HD-88: State Rep. Sheryl Delozier is a challenger magnet. In addition to rumored primary candidate Gary Eichelberger, a Cumberland County Commissioner, Delozier has officially drawn a Dem opponent in Joshua Coward, 23, an ex-Marine and HACC student who lives in Mechanicsburg. With a name like Coward, how could he lose!

HD-157: Former state Rep. Paul Drucker was endorsed by the Chesco Dems for a rematch against freshman Rep. Warren Kampf.

Have an update on a legislative election? Email it to press@politicspa.com. Hat tip to Eric Smith of the Pottstown Mercury for his eight-dozen election updates.