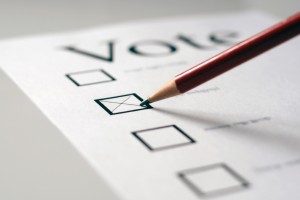 We now know what the April 26th primary ballots will look like.

Every year, ballot positions in the Keystone State are decided by a lottery system. This means that any candidate could end up in any spot without regard to incumbency or even alphabetical order.

We’re going to take a look at the statewide races as well as a few congressional primaries to analyze how placement could ultimately affect the results.

Hillary gets the top spot over Bernie. I have no idea who the third person listed here is or if he/she is even real.

Cruz and Rubio are the lucky ones here while Trump ends up at the bottom. Jeb Bush’s ballot position continues on even after his campaign is over.

Now, this is interesting. One of the most competitive races has an unknown at the top of the list. They’ll now be even more incentive for Sestak to get Vodvarka kicked off the ballot. If Fetterman gets the first spot it may help him and McGinty won’t be pleased being listed last.

A break for Peters who has the much lower profile. Nonetheless, in a statewide race the favorites should have enough money to overcome ballot placement.

Muroff drew the short straw while Gordon has to be ecstatic. Still, Fattah and Evans are very well known in this district, though the Congressman will take a bit of satisfaction knowing he is technically one up on his biggest rival.

If the Parrish campaign has their way they’ll be the first and only name on the ballot. Either way, they have the advantage in what is turning into a bloody primary fight.

This could be the most underrated intraparty contest this year. Balchunis, though, will enjoy the premiere ballot position and the greater name recognition since she was the 2014 nominee.

A nice break for Cascio but this shouldn’t make any difference. It would be a surprise if Meehan was seriously contested.

For the second straight election, Naughton got the No. 2 position on the ballot. She’s hoping the result will be different the second time around.

To use the old sports cliche, there’s certainly no love lost between these two rivals. Rep. Shuster must be quietly pleased he’ll have the top spot.

Incredible similar to the PA-7 race. Under-the-radar primary with a 2014 nominee getting the top spot over her rival.

The trend of this lottery (if such a thing is even possible) is the “establishment” candidate also securing the No. 1 position on the April 26th ballot.