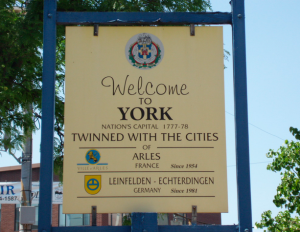 The PA Republican Party Wednesday criticized Obama for America, the President’s campaign organization, on opening an office in York. But the release was a tad late – this will be the twenty-third Obama field office in Pennsylvania.

“One more office or one more visit won’t convince voters that President Obama and Senator Casey are working to help them.  The Obama-Casey agenda has only held back our potential for economic growth and new jobs, while leaders like Governor Corbett here in Pennsylvania have been able to offset some of our challenges by attracting new businesses to put people back to work,” said PAGOP Chairman Rob Gleason.

Echoed York County Republican Committee Chairman Bob Wilson, “President Obama doesn’t share our values in York County. We will work tirelessly to partner with the Romney campaign and the PA GOP to build the largest grassroots operation York County has ever seen to ensure that voters get to the polls on November 6.”

It was the first such release received by PoliticsPA, however a party spokeswoman said the PAGOP had issued responses to around six other office openings to date.

But one can hardly blame them for lagging; Obama’s campaign has been very active in PA so far. The York office, number 23, will be followed shortly by number 24 in Bethlehem. The offices are located across the state, though concentrated in southeast PA and Philadelphia.

The Obama campaign would not release any information about staff, but a consensus among Democratic operatives is that they have over 30 people working in the state full time.

The Romney campaign has an office in Harrisburg that, during the brief time when the primary looked competitive, was staffed by 4 people.

“Our Victory staff and offices are just beginning to take shape but our efforts here have been ongoing.  Unlike President Obama’s campaign, ours will be driven by energy and momentum of voters and grassroots volunteers who are ready for a new direction and will make millions of phone calls and knock on thousands of doors across the Commonwealth in the coming months,” Gleason said.

Obama’s campaign swung back at the PAGOP.

“The Pennsylvania Republican Party and Mitt Romney don’t think they can carry Pennsylvania and today they made clear they aren’t even trying,” said OFA-PA spokeswoman Jennifer Austin. “While Romney and Gleason support the same failed policies that benefited a few but crashed our economy and punished the middle class, President Obama and middle class Pennsylvanians know that America is stronger when hard work pays, responsibility is rewarded, and when everybody plays by the same rules.”

Her response hinted at recent comments by Gleason to the Allentown Morning Call that even Romney doesn’t think he has a strong shot in PA:

When Romney was in Harrisburg for a fundraiser, Gleason told him they would win Pennsylvania. He said Romney responded, “Really?”

The Obama office is located in downtown York, and its primary goal will be to increase turnout in that city – as well as nearby Red Lion.