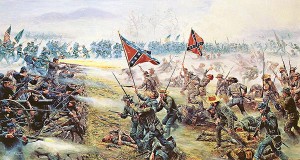 Good morning politicos, here’s the Buzz. Tonight he’s gonna party like it’s 1863. Rick Santorum will be in Gettysburg tonight to watch the election returns come in from the primary in Illinois. Any Civil War wonks want to compare his campaign strategy to a famous general?

Luksik Forms SuperPAC for Rohrer: She’s back. Peg Luksik, the perennial candidate who most recently challenged Pat Toomey in the 2010 GOP primary for U.S. Senate, has formed a super PAC to boost 2012 Senate hopeful Sam Rohrer.

Rohrer Signs on to 9-9-9: Senate hopeful Sam Rohrer has signed onto the tax plan of one-time GOP presidential hopeful Herman Cain. The proposal would scrap the current U.S. tax code in favor of a 9 percent corporate tax, a 9 percent personal income tax, and a 9 percent national sales tax.

Gingrich, SC Guv Haley Coming to PLC: Newt Gingrich is coming home. The former House Speaker, who represented Georgia in Congress but was born and raised in Harrisburg, will speak this weekend at the Pa. Leadership Conference. South Carolina Governor Nikki Haley will also attend as a Romney surrogate.

¿Dónde están los latinos Republicanos? The Morning Call takes a look at the widening gap between Dems and Republicans in the growing Latino population in Pa. and around the country.

Reader Poll: Which Dem Will Win AG Nom? Democrats must choose between Kathleen Kane, a former prosecutor from Lackawanna County, and Patrick Murphy, a former Congressman from Bucks County. Who do you think will prevail?

More Medicare Messaging from Dems: The Democratic Congressional Campaign Committee, as well as individual candidates, are ramping up their Medicare messaging. The DCCC is running robocalls against five Pa. members of Congress: Dent, Fitzpatrick, Gerlach, Meehan, and Murphy.

Santorum Backed Specter for Prez, Reminds Romney: Mitt Romney is reminding voters of Santorum’s support for his former colleague, Senator Arlen Specter, when he ran for President briefly in 1995.

PoliticsPA Reader Poll: Holden Faces Toughest Primary: After over 1,000 votes, the results are in. PoliticsPA readers think the PA-17 race between Rep. Tim Holden and attorney Matt Cartwright is the toughest primary in the state.

Who Got Boos at Pittsburgh Parade? Short answer: everyone. It was a beautiful weekend for the St. Patrick’s Day parade in Pittsburgh. But sunny skies or not, VP Joe Biden and Gov. Tom Corbett took their share of grief from the crowd.

SD-29: The Melley Memorial Lodge of the Fraternal Order of Police, which represents over 500 current and former state police officers, voted to endorse Brian Rich. He’s challenging Sen. Dave Argall (R-Schuylkill) in the primary. “I am honored to have the support of the state police officers, who have risked their lives protecting the citizens of Pennsylvania,” Rich said.

HD-24: Rep. Joe Preston (D-Allegheny) will remain on the ballot, by the skin of his teeth. After a court challenge, he was left with 308 petition signatures. 300 are required. His campaign withdrew two pages of petitions which were accused of containing forgeries. He faces Ed Gainey in the primary.

HD-103: Roy Christ, the former President of the Harrisburg School District Board, took strong aim at the new Voter ID law Monday. “This is a systematic process by Tom Corbett and the Republican leadership to make it harder for people to vote.  Wars and movements have been fought and waged to get the right to vote and insure that is administered fairly.  This is our most basic right and Tom Corbett and the legislature are taking it away from thousands,” he said during a press conference in front of the Governor’s mansion.

HD-182: Rep. Babette Josephs’ campaign responded to criticism (via YouTube video) from primary opponent Brian Sims, and attorney and LGBT activist, that she wouldn’t debate. She said her record speaks the loudest. “Mr. Sims has not challenged me on a single substantive issue,” Rep. Josephs said. “He’s just playing ‘gotcha’ and distracting voters from the very real threats from the right wing in Harrisburg. These are real issues and we are dealing with them right now. Where was Mr. Sims when we held off the Marriage Discrimination Amendment?” She accepted a debate invite by the Center City Residents Association and other local organizations on April 17th, 2012.

Not seeing your news in the Buzz? Add press@politicspa.com to your distribution list.

Southwest
AP: Orie testifies in Pa. campaign corruption trial
AP: Santorum: ‘Issue in this race is not the economy’
WJAC: Casey touts Biden meeting to try to save Air Force Reserve base

Opinions
Daily News: Letter to the Editor: Open-carry gun law gets bad reception
Daily News: Letter to the Editor: Efforts to save Catholic parish elementary schools in Philadelphia
Inquirer: Opinion: Jobless applicants are subjected to bias
Daily Local: Letter to the Editor: Governor Corbett’s budget is bad for the environment
Delco Daily Times: Letter from the Editor: Fight to save refineries is heating up
Times-Tribune Editorial: Mellow Case Needs More Detail
Wayne Independent Editorial: Just What Are They Thinking In Harrisburg
Morning Call: Where is the return on investment for taxpayers?
Morning Call: Tuition increases could price students out of college
Reading Eagle: Do not expect district to resolve bigotry on its own
Courier Express: New voter ID law supported by most of us
Courier Express: Wheelchair-bound Capitol protest risks tragedy