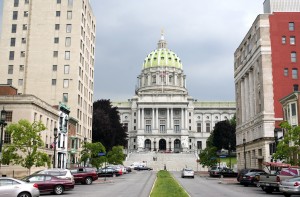 10 Congressional Candidates Meet in York: The 10 candidates vying to replace Rep. Todd Platts met in York Wednesday night, and there was more agreement on the issues than not. So we got them on the record about term limits.

3 Lackawanna Dem Committees Endorse Holden: Rep. Tim Holden is new to NEPA; the 20-year Congressman acquired Scranton and Wilkes-Barre in the latest round of redistricting. And since his challenger, attorney Matt Cartwright, hails from Moosic, those areas will be a key bellwether in the race. This week Holden picked up three local endorsements.

And the Award for First State Rep or Senate Candidate on TV Goes to… Brian Rich, the energy company executive challenging Sen. Dave Argall (R-Schuylkill) in the GOP primary, is airing a 30-second bio spot.

Enviro Groups Launch Big TV Buy in Pa: Two major environmental groups are seeking to change the conversation about regulations and clean air standards. In a 30 second spot, the Sierra Club and the Natural Resources Defense Fund make the case that the top issue is children’s health.

SD-15: Democrat Rob Teplitz, one of Senate Dems’ top recruits in Pa., pulled in the endorsement of York Co. Commissioner Doug Hoke Wednesday. “Rob Teplitz offers us new leadership with the experience we need to end politics as usual in the Capitol,” said Hoke.

SD-15: Republican Josh First is taking issue with the decision of the Pa. Chamber of Commerce to endorse attorney and former Dauphin GOP chairman John McNally. “It is a fact that neither I nor the third candidate for this seat were interviewed for the endorsement.  While I do not begrudge the endorsed candidate his endorsement, I do believe that ChamberPAC should clarify that its decision was made long before either of the other two candidates were in the race,” he wrote to the Chamber.

SD-29: Brian Rich is on TV. The GOP primary challenger to Sen. Dave Argall (R-Schuylkill) is up with a 30-second bio spot. Rich’s family owns several oil and energy companies.

SD-37: The intrepid Laura Olson of the Post-Gazette notes that two would-be GOP contenders for the seat of retiring Rep. Mark Mustio, who decided not to run after all, are getting state appointments. Kim Stolfer of Firearms Owners Against Crime was named to serve on the new the Governor’s Advisory Council for Hunting, Fishing and Conservation. And the state Senate now is poised to vote to confirm Allegheny County Councilman Vince Gastgeb of Bethel Park as a new member of the Pennsyvlania Securities Commission.

HD-134: In case you haven’t figured it out, someone close to the Rob Hamill campaign has discovered our email address (press@politicspa.com). The GOP hopeful to replace former Rep., now Lehigh Co. Judge, Doug Reichley has been busy. He picked up the endorsement of the Eastern Pa. Business Owners and Professionals Network and the Lehigh Valley Wholesale Real Estate Investor’s Group , and signed a pledge to opt out of the state pension.

HD-185: State Rep. Maria Donatucci (D-Phila) appeared to have removed her two Democratic challengers from the ballot before two hearings today. Candidate Norma McNeil, who works in human resources for a transportation company, stipulated that she had fewer than the 300 valid signatures needed. An attorney representing candidate Fareeda Mabry also stipulated to that, court records show. But Mabry, who works for Universal Companies, showed up for her hearing today, saying she had not authorized her attorney to concede.  A court order showed she has been removed from the ballot.  The door to the courtroom where her hearing was to be held was locked.  Mabry left court without being heard.

HD-203: Rep. Dwight Evans (D-Phila) has one fewer primary opponent. A judge tossed bus driver Sabriyah Bilal off the ballot. His attorney is contesting that Evans’ other opponent, Lamont Thomas, hasn’t been a resident of the district for the required 1 year. That ruling comes Friday.