These are the final Ups & Downs before the primary on Tuesday. See who has the momentum and who doesn’t in the kay races around Pennsylvania.

PA Journalism. Not one but two Pennsylvania newspapers this week won a Pulitzer Prize. It’s an incredible accomplishment and a credit to the hard work of the Philadelphia Inquirer and Sara Ganim and the Harrisburg Patriot-News, covering the violence in Philly schools and the Jerry Sandusky scandal, respectively. Well deserved.
.

Tim Holden. The 9-term incumbent Congressman is in the fight of his political life and momentum is moving against him. It started when the GOP drew a district that was 80 percent new to him, it got worse when his opponent Matt Cartwright raised and loaned himself over $700K. But it became career-threatening when outside groups dumped over half a million into the district in attack ads. Holden called for a ceasefire of negative ads on Thursday, and Cartwright accepted. But the PACs haven’t, and the damage is largely done.

Steve Welch. It’s looking rough. The GOP-endorsed candidate has only a small TV presence in the final week of the campaign, and some party leaders have gone public with doubts about his chances. Tom Smith and Sam Rohrer out-raised him in the first quarter ($443K for Smith, 156K for Rohrer, $152K for Welch). Will the party’s organization get out his vote on election day? Will the $145K anti-Smith IE make a big enough dent? We’ll see on Tuesday.

Jon Delano. Politics is a funny place. Who’d have guessed a week ago that the term “CookieGate” would exist, let alone go viral. The KDKA news man picked up on Mitt Romney’s slight against a famous Pittsburgh-area bakery and inadvertently gave the story national legs.
.
.

HDCC. The Pa. House Dems’ campaign arm has a legitimate chance to go 6-for-6 in Tuesday’s special elections, thanks to their tapping into the national “war on women” theme in HD-134. An ad they aired, tying Republican Ryan Mackenzie to the ultrasound mandate, caught the attention of Planned Parenthood national, which decided to drop $100K into the R-leaning district. Mackenzie opposes the mandate, but who cares? Ad spending is against him 2-1.

Mark Mustio. He’s running to replace retiring Sen. John Pippy (as well as his own state House seat), but faces a tough opponent in 2011 Allegheny Exec candidate Raja. The campaign has been a nasty one; Mustio hammers Raja over his company’s outsourcing, Raja blasts Mustio for his 2005 pay raise vote. The pay raise cuts deeper. Mustio’s campaign has also drawn fire for racially-tinged attacks. They even drew a favorable comment about Raja from Mustio endorser, Rep. Tim Murphy. Mustio called for a ceasefire and pulled his negative ads just we were writing this.

Mark Critz. The Johnstown Congressman appears to have the momentum in this race. The first public poll of the campaign put him down just 4 points, narrower than any of the internals yet released. Jason Altmire is playing defense on his support for the Balanced Budget Amendment. And Bowzer, yes that Bowzer, is on the ground to help him get out the vote. 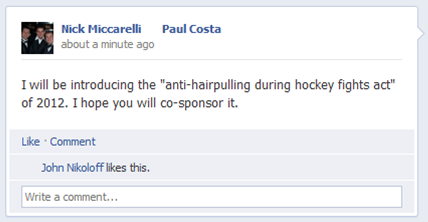