Two Pennsylvanians make MSNBC for very different reasons and an impeachment hearing goes awry. See who all made this week’s list.

Vincent Hughes: The Philadelphia State Senator scored an interview on MSNBC for the stand he’s taken against the KKK activity South Central PA. Hughes petitioned and received a response from the Pennsylvania Human Relations Commission regarding alleged Klu Klux Klan activity in Fairview Township. TJ Holmes interviewed Hughes on MSNBC earlier this week and Hughes was able to promote the years of work he’s done to eradicate racist activity in the Commonwealth.

Daryl Metcalfe: In the weeks since the botched Philadelphia sting operation was revealed, AG Kathleen Kane has stumbled trying to gain the high ground in the discussion. This week, State Rep. Daryl Metcalfe mobilized Kane supporters and embarrassed himself when he attempted to impeach Kane in the House State Government Committee meeting earlier this week. He had another representative removed and the entire House Democratic coalition left the meeting entirely in a show of support behind the AG.

Gene Stilp: Thousands of people showed up to rally in Harrisburg in favor of natural gas development, but one guy was able to throw them off message. The good government advocate  carried a sign that read “Tax the frackers behind me” in front of their rally and led them all the way to the Capitol. Point made, sir.

Rob McCord: MSNBC rarely criticizes Democrats, and even more rarely are those critiques on the basis of racial issues but this week Chris Matthews scolded the State Treasurer for his ad that tied Tom Wolf to York Mayor Robertson who was charged with murder in a 1960s race riot. Former Governor Ed Rendell, Senator Bob Casey and Allegheny County Executive Rich Fitzgerald also voiced their displeasure with the spot.

Allyson Schwartz: Getting an anti-endorsement isn’t often good news, except when it comes from a Tea Party group when you’re in a battle to win a Democratic nomination. The Independence Hall Tea Party PAC gave an anti-endorsement to the Congresswoman this week, calling her the most anti-Tea Party candidate in the race for governor. Being the furthest candidate from the Tea Party is an honor to run on in a Democratic primary, and the news is sure to mobilize Schwartz supporters who

Mark Cohen: Despite holding the seat for decades, Cohen has a serious challenger this year: Jared Solomon. Solomon has been endorsed by a handful of local organizations and popular Philadelphia Democratic Rep. Brian Sims. He’s now running two ads in the primary against Cohen and according to a source close to his campaign, internal polling shows him with a double digit lead over the incumbent.

Tweet of the week double dips a bit into Metcalfe’s Down Arrow, but Sims wraps it up nicely in this tweet.

Nothing says “I want an exchange of ideas” like a one-sided list of testifiers and calling security to remove a fellow committee member.

Selfie of the week: This feature award goes to Representatives Bizzarro, Farina and Flynn for showing us that legislators are regular people who take selfies at work like the rest of us. 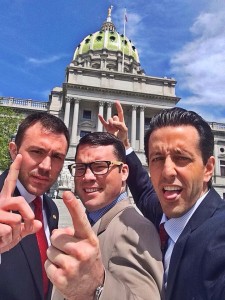