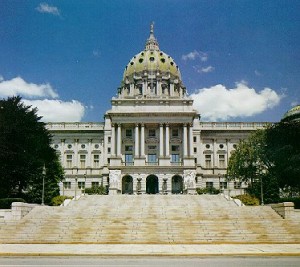 We have all the coverage you could ever want of Voter ID: the ruling, the reaction and the results of our own reader poll. We’ve also got two ads that came out yesterday – one for Senate candidate Tom Smith and the other for state Senate candidate Janet Anderson.

Judge Simpson Rules, Voter ID Law Stands (Updated): Pennsylvania’s most controversial law of the year has been upheld by Commonwealth Court Judge Robert Simpson, who ruled this morning and issued a 70-page opinion.

Politicos React to Voter ID Ruling: Voter ID may be the most controversial issue in PA politics this cycle, and Judge Simpson’s ruling today triggered responses from leaders across the state. Read their responses here.

Poll Results: Readers, Judge Simpson Not on Same Page: If it were up to our PoliticsPA readers, opponents of the Voter ID law would’ve won in a landslide. A huge majority of votes cast showed our readers believed nearly 3 to 1 that the injunction would be granted.

Santorum Shows Support for “R&R” in Akron: Once a Republican presidential nominee himself, former PA Senator Rick Santorum has publicly endorsed Mitt Romney since May. Wednesday, Santorum plans to show his full enthusiasm of Romney-Ryan by headlining an event in Akron, Ohio today at 3 p.m.

Legislative Election Updates
HD-133: Morning Call reported yesterday that state Rep. Joseph Brennan (D-Lehigh) was arrested. He allegedly choked and punched his wife on the porch of their home and drove away drunk. Police picked him up a short while later and charged him with drunk driving and assault. Morning Call reported that Brennan was arrested in June 2011 for drunk driving, careless driving and public drunkenness. He had a BAC of four times the legal limit.