The money allocated for TV/digital media ad buys for the open Pennsylvania U.S. Senate seat is now past $60 million.

According to AdAge, Republican candidates and the political action committees that support them have spent $34.4 million across TV, radio and digital advertising from Dec. 28, 2021, through Election Day as of March 30, 2022. Democratic candidates and PACs, meanwhile, spent $27.5 million in the same measurement window.

At the campaign level, though, the two biggest-spending Republican candidates—former TV doctor Mehmet Oz and former hedge fund manager Dave McCormick—have each roughly doubled the outlay of the top-spending Democratic candidate, Conor Lamb, the current U.S. representative from Pennsylvania’s 17th congressional district. During our three-month measurement window, Oz is at $8.6 million, McCormick is at $8.3 million and Lamb is at $4.2 million. 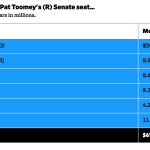 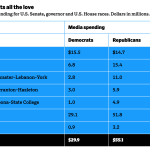 Here are the latest ads released and approved by the campaigns since our last edition on March 18. Super PAC ads are not included.

Quotable: “President Trump endorsed Dr. Oz for Senate because Trump knows who the real conservative is.”

Quotable: ” Mehmet Oz is a complete and total fraud.”

Quotable: “Why has our political system turned into one that only supports candidates who have so much money themselves that they don’t need the support of the people?”

George Bochetto: We Deserve Better … Than McCormick and Oz (0:30)

Quotable: “These two guys want you to believe they’re Republicans but they’re lying to us.”

Quotable: “There’s a lot of great towns in Pennsylvania that feel like their community’s best days were a generation ago.”