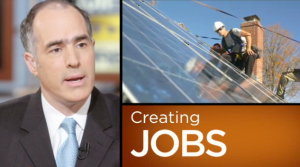 Update:The ad is indeed the product of the Pa. AFL-CIO, President Rick Bloomingdale confirmed to PoliticsPA. A copy of the ad is below.

“We decided to do the ad because Bob Casey has been fighting hard for workers,” Bloomingdale said. “Some times he operates quietly and not out on the forefront and we thought it was time people recognized the good work he’s doing.”The ad began today and will air through Friday.

According to a Republican media consultant, the AFL-CIO will spend over $170,000 to air television ads in support of Democratic Senator Bob Casey. The spots are scheduled to begin Monday.

The ad buy was discovered during a routine survey of political advertisements on Pa. TV stations. It will air in each of the state’s 6 major television networks on a mix of broadcast and cable.

Casey currently has a record of voting with the labor group 98 percent of the time, according to the most recent AFL-CIO scorecard.

Republicans have been on the attack against Casey lately. They sought to tie him to President Obama, whose numbers in Pa. have flagged over recent months. For example, the Senator took lumps last week during and after a visit by the President to Scranton. There were votes in the Senate that day and he did not attend the speech.

Here are the details we have via our GOP media consultant source, broken down by media market:

Cable schedules will air on CNN, Headline News and MSNBC, with AMC also used in a few smaller markets.