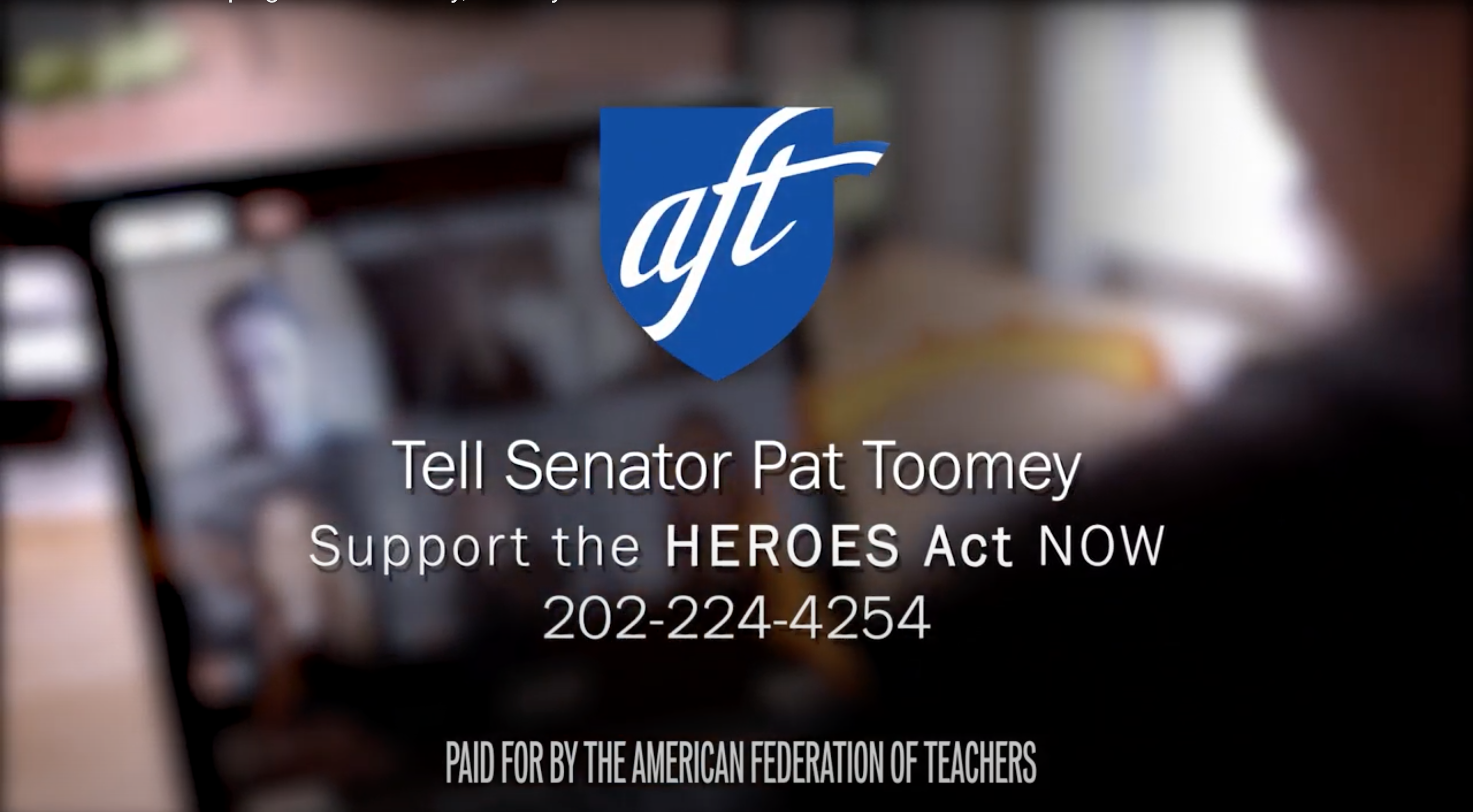 An influential teachers union is on television with a $1 million ad campaign pressuring Senators to support the HEROES Act in Washington D.C. and 10 states, including Pennsylvania.

The American Federation of Teachers’ two-week ad campaign in the commonwealth urges Sen. Pat Toomey (R-PA) to back the $3 trillion coronavirus relief bill.

The ad features a number of workers who have been deemed “essential” during the coronavirus pandemic and stresses the need to pass the relief package.

“Ask yourself, in these challenging times, who is essential,” a voiceover says to begin the 30 second spot. “Where are the front lines, how can we reopen without teachers, and caregivers?”

“We must fund our public schools and community services,” the voiceover in the ad continues. “We can’t afford to forfeit our future.”

The ad ends with a phone number for Toomey’s office, encouraging people to call and voice their support for the bill.

“If the HEROES Act fails to pass, and states and schools don’t get the support they need to reopen safely, then they’ll stay shut and the economy will stall—it’s that simple,” AFT President Randi Weingarten said in a statement to Forbes.

Toomey’s office did not immediately respond to comment on this ad.

The $3 trillion package passed the U.S. House in mid-May largely along party lines, with every member of the state’s Democratic delegation voting for it, except Reps. Conor Lamb (D-Allegheny) and Susan Wild (D-Lehigh), who joined their GOP colleagues in voting ‘no.’

Lamb described the bill he voted against as “not focused, it was rushed to a vote too fast, and it doesn’t help us accomplish that core mission,” while Wild echoed similar similar sentiments by calling for a more bipartisan piece of legislation.

While Sen. Bob Casey has publicly voiced his support for the HEROES Act, Toomey has not said he backs the spending package as many pundits believe the legislation has “little chance of passing as-is” in the GOP majority Senate.

The ad, which first aired on June 11 and will run until June 25, is currently airing on CNN, MSNBC, Fox News, and Facebook in the following four markets in the state: Harrisburg-Lancaster-Lebanon-York, Philadelphia, Pittsburgh, and Scranton-Wilkes Barre.

A spokesperson for the group told PoliticsPA that the ad buy in Pennsylvania is in the six figure range.