After Convention, Clinton and Kaine To Bus Across PA (UPDATED) 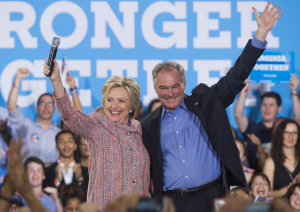 After formally accepting the Democratic nominations for President and Vice President at the DNC in Philadelphia, Hillary Clinton and Senator Tim Kaine will be taking a bus tour which will traverse Pennsylvania.

According to Thomas Fitzgerald of the Inquirer, Clinton and Kaine will start their tour on Friday at Independence Hall. After that, they will head west with definitive stops in Harrisburg, Johnstown, and Pittsburgh. Several other unplanned stops will occur along the route.

By late Saturday and throughout Sunday, the tour will wrap up in Ohio.

Clinton will probably be taking the time to introduce Kaine to the people of PA, Ohio, and Americans in general.

Hillary seems to be taking a cue from her husband’s playbook as when Bill Clinton ran in 1992, he also did a bus tour with his running mate Al Gore.

More importantly, Clinton and Kaine will try to shore up Pennsylvania, which has not voted Republican in the presidential election for the past six cycles. Donald Trump, however, has made it clear that he intends to make a serious challenge for the rust belt states including Pennsylvania.

Currently, the race in Pennsylvania is fairly tight with the latest average of polling from FiveThirtyEight having Clinton up by only 1.9 percentage points. As of late, Clinton has been trending downwards while Trump is on the rise in the Keystone state.

Expect several more appearances by the Clinton and Trump campaigns as both fight for Pennsylvania’s valuable 20 electoral votes.