AG Candidates Zero in on Sandusky

The role of the Attorney General isn’t a well-known one among average voters, so the Jerry Sandusky case is a useful platform the candidates can use to connect with the electorate.

With the verdict recently handed down, both Kathleen Kane and David Freed have stated that they believe justice was served by the jury’s decision. 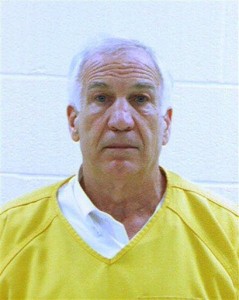 And Freed, as the featured speaker at Monday’s PA Press Club Luncheon, made sure to reference child welfare as the most important focus of any judicial system.

If elected, he promised to eliminate the statute of limitations for child abuse cases, and create a special victims unit to focus on child abuse, elder abuse and financial fraud to protect victims “of the most sensitive, personal and debilitating crimes…to ensure that they receive the necessary, timely services, and most important, the necessary and timely justice.”

But the Sandusky case had another element to it: Gov. Tom Corbett’s role. Corbett served as Attorney General until 2011, meaning that he was the state’s top law enforcer during the initial stages of the investigation.

The case began under his tenure, but proceeded at such a slow pace that he has been the recipient of some backlash for not fast-tracking it, or at least doing more to prevent Sandusky from committing further crimes in the meantime.

The Attorney General’s office as well as state police comprised a team led by Randy Feathers. He told the Altoona Mirror that a shortage of manpower led them to use Bureau of Narcotics investigators to help.

“During the Bonusgate investigation, we had a shortage of investigators in Harrisburg,” said Feathers.

Corbett said Monday that the lapse between the first report of child sexual abuse and the filing of charges (which took about two years) was necessary for the grand jury to report and for authorities to build a strong case.

While his critics don’t buy it, and say the investigation should have moved faster, Corbett had a lot on his plate.

Not only was the Sandusky case was one of the most controversial the state has ever dealt with, but the reputation of one of Pennsylvania’s best institutions (not to mention that of a football legend, Joe Paterno) was rocked to its core. The athletic world was stunned.

Corbett said that all of those factors led to a long and drawn-out case.

“I think it surprises some people, the length of time it took,” Corbett said. “But having been an assistant DA, an assistant U.S. attorney and handling cases like this, I understood that you have to do a complete investigation and get as many witnesses as you possibly can.”

Kane has been especially visible on the issue, appearing a dozen times on national cable news to discuss it and even dedicating an entire section of her website to the Sandusky/Penn State University scandal.

In it, she including a three-part proposal to change the way child abuse is reported.

It says on the site that all state-funded universities must educate their staff on child abuse reporting, and that suspected abuse must be reported to both child protective services and the police. Last, she said the statewide CHILDLINE database would be made available to law enforcement.

CHILDLINE is a resource of sexual abuse related crimes maintained by the PA Department of Public Welfare and can be accessed by child protective services. Kane said real-time access isn’t given to police officers or investigators.

It raises the stakes for the Governor and his allies: should Kane win and decide to make public the office’s records of the investigation, it could mean a great deal more scrutiny for Corbett.