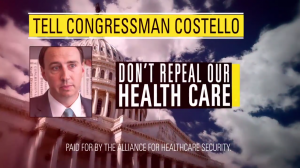 The Alliance for Healthcare Security (AHS) is running a TV ad against Congressman Ryan Costello (R-Chester) for the Republican plan to replace the Affordable Care Act (ACA).

“Washington politicians are at it again with another disastrous healthcare repeal bill that raises costs and cuts coverage for millions,” the ad says.

According to filings with the Federal Communications Commission, the ad will be running on WCAU beginning today and running through Thursday.  PoliticsPA has not been able to find how much money is being spent on the ad buy.

Ad buys that are this short and on only one network are often used to more to generate media coverage than move the needle of support for an issue.

The Washington Post reports that the AHS is part of a “mammoth coalition to defend Obamacare” organized by liberal groups.

“Congressman Costello is one the strongest advocates for patients and access to healthcare in congress. Too often scare tactics and misleading attacks from liberal front groups such as this only serve to hinder meaningful debate on on important subjects as healthcare,” Costello campaign senior adviser Vincent Galko said in an email.