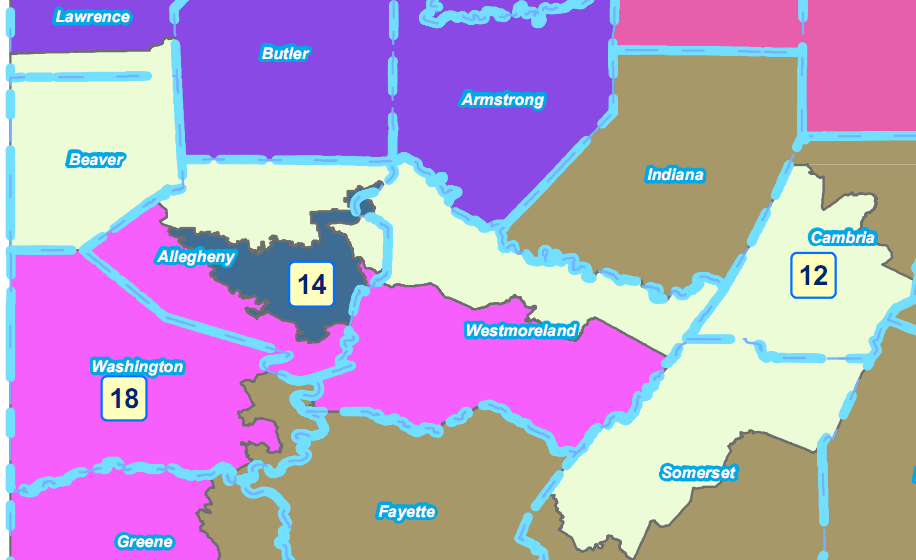 The preliminary map is in, and as expected Reps. Jason Altmire (D-Allegheny) and Mark Critz (D-Cambria) are in for a primary fight.

The two will test the boundaries of their friendship and strong working relationship as they duke it out for the newly formed 12th congressional district. It contains pieces from both of their current districts.

The matchup was widely anticipated: Pennsylvania had to eliminate one congressional district after the 2010 Census, and no area lost more population than southwestern Pa.

It’s going to be one of the biggest primary showdowns in Pa this year, and both men are preparing for the coming battle. Each has said that he will run for re-election.

Altmire said he was pleased with the map, because the district contains his base in Beaver and Allegheny counties – along with the area where he grew up in Westmoreland County. He added that he was sorry to lose all of Mercer and most of Lawrence county.

“I think its fair and I think its favorable for me, so I don’t have a problem with the way it was drawn,” he said. “I’m not happy about being in the same district as my friend and somebody that I campaigned for and have worked with, and that I respect and like. But again if you assume that that’s the outcome that was unavoidable, the way that its drawn I think is fair.”

“I have been honored to represent the 12th Congressional District in Congress and I look forward to continuing to represent this district beyond the 2012 election,” he said. “The boundaries of my district may have changed, but my priorities remain the same,” and, “I look forwarded to a spirited campaign.”

The new district contains northern Westmoreland County, the southern half of Cambria County and the northern half of Somerset County, each current Critz areas.

The population figures and voter history data are not yet available. Judging on the map, the population of the district appears to be slanted in Altmire’s favor – he will likely keeps about 60 percent of his current constituents. Altmire lives closer to the population center of the district. Plus he’s been in office longer – since 2006. Critz won his seat in 2010.

However, Altmire has weaknesses in the Democratic primary. Although he and Critz share a very centrist voting record, his is further to the right. Earlier this year, for example, he voted in favor of a Balanced Budget Amendment while Critz voted against it. Allegheny labor leader Jack Shea even threatened a primary against him after his vote against the health care law.

In a region where labor is king, Critz may have the inside track at their support. In addition to Altmire’s friction, Critz has spent much of his time in Congress targeting trade issues, particularly dealing with China.

A source close to Critz said labor would be a big part of his campaign equation.

“We’ve already had a number of unions ask us if they could be the first union to endorse,” he said. “Labor is gonna come on strong, and I can’t stress it enough.  In a small, low turnout Democratic primary in western Pa. labor is a huge factor.”

Altmire predicted labor would stay on the fence.

“I’m guessing, without having spoken with them directly but that they will probably either sit it out or help in a 50/50 way or neutral way,” Altmire said, noting that Critz has said that he, too, would have voted against the health care law. “When you look at the two candidates and the issues that those groups care about, I would be surprised if they would feel like it would be to their advantage to go all in one or the other.”

But the primary winner will not be guaranteed to keep his seat. The map appears to have been drawn so as to put the district within reach for a Republican challenger. For example, rather than lump strong GOP areas like the North Hills into Rep. Tim Murphy’s 18th district, the map keeps it in Pa-12. Meanwhile Rep. Bill Shuster (R-Blair) absorbs Democratic-leaning areas in Fayette, Greene and Washington counties.

Observers of the process reported that Majority Leader Mike Turzai (R-Allegheny), one of the men with the pens for this map, advocated a district that would allow ally Rep. Jim Christiana (R-Beaver) to make a credible tun. It doesn’t hurt that Turzai lives in the new district; he previously sought a seat in Congress and Harrisburg scuttlebutt says he’s leaving the door open to another bid in the future.

In an interview with PoliticsPA, Christiana stopped short of an official announcement.  But he said the map, “is in no way discouraging from deciding to run.”

“In fact, it’s encouraging in a sense that it looks like a map that would elect a conservative reformer that has a record to back it up, to back up those qualities. It’s definitely a district where my home area will play a significant role,” he added.

He said he would announce his decision shortly after the new year.

The home of announced Republican candidate Keith Rothfus is actually in Murphy’s 18th district, in Edgeworth. However, he has previously ruled out a primary against Murphy. A spokeswoman says Rothfus intends to challenge either Altmire or Critz, and would move to Sewickley so as to stay within the new 12th district.

“He’s close enough to Sewickley so it certainly would not be an issue for him to [move],” said Rothfus campaign manager Stephanie Miller. “It’s close to the district that he would prefer to run in. He of course doesn’t have any desire to run against Congressman Murphy.”