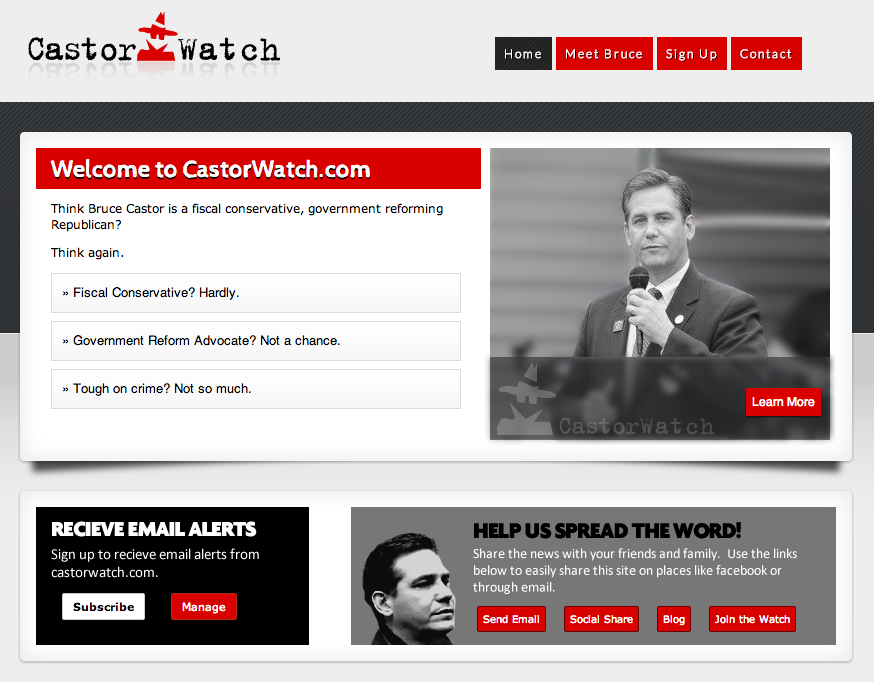 The Republican primary for Governor just heated up. Anonymous critics of Bruce Castor have launched a website for opposition research on the Montgomery County Commissioner. He is considering a challenge to Tom Corbett.

CastorWatch.com impugns his record as a fiscal conservative and a government reformer, and even his work as Montco’s former District Attorney.

“Since launching his exploratory campaign for governor, Bruce Castor has parroted the talking points used by many fiscal conservative, Tea Party affiliated candidates. However, his record on tax and spending issues betray his often repeated statements,” the site reads in a typical section.

Its quality and style give it the feel of a typical opposition research website one would see during a campaign.

There’s one main difference: it’s anonymous. The site was registered on February 25 this year, but its owner is unlisted. The website has no disclaimer, as would be required if it was set up by a political campaign or committee.

Domain name services (Network Solutions, Go Daddy, etc) give customers the option of registering through another company, thereby masking the owner of a website. The folks behind CastorWatch.com chose to spend the few extra dollars it costs to use this option.

As one GOP operative told PoliticsPA, “You can use the process of elimination to figure out who set this up. Just make a list of every Republican who doesn’t get along with Bruce Castor and call them one-by-one. I’ll see you next year.”

Pa. campaign finance law in notoriously permissive, and it appears that a disclaimer would be required only if the site were “expressly advocating for the election or defeat of a candidate,” which it is not.

Castor is known for his aggressive opposition to the Republican establishment in Pa. and particularly in Montco.

He has not declared his candidacy for Governor, but he has signalled an interest. He created a website earlier this month that advocates his platform for state government.

The latest survey from Public Policy Polling showed Corbett leading Castor 43% to 23% in a hypothetical primary.

If the site’s creators sought to deter Castor, it may have the opposite effect. A few GOP operatives PoliticsPA spoke with said the site was more likely to encourage than discourage him.

Castor dismissed the site in an email to PoliticsPA.

“I am delighted to be the target of this, a juvenile smear campaign by the Party Establishment,” he wrote. “It confirms that even as an undeclared (and only a potential) candidate, I’m getting their attention a whole year out from the primary. Good. I doubt it will help boost the governor’s historically low approval ratings to attack me. Maybe getting some RESULTS would be more effective? Good governing is good politics.  Give it a try. For the facts, log on to www.BruceCastor.com.”