The American Working Families Action Fund, a 501c4 founded by DC-based Democratic campaign operative Bud Jackson, is keeping up its TV assault on Gov. Tom Corbett. The group began a multi-market campaign last week and it continues today with a new spot.

The theme is the same: Corbett is helping his allies and donors at the expense of the middle class. 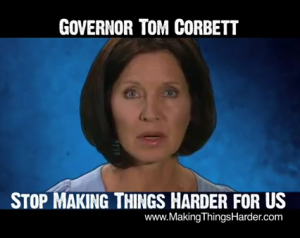 The ad begins with a woman saying direct-to-camera, “Our eyes are wide-open, Governor Corbett” – a reference to his controversial comments about the proposed ultrasound mandate.

“We saw you take money from a former coal executive whose company polluted our drinking water,” says another person. “And then we watched you appoint him to a position that polices environmental permits,” says a third.

That line is a reference to Alan Walker, the secretary of the Department of Community and Economic Development. In his current role Waker, who contributed over $100,000 to Corbett’s campaign, has discretion over numerous permitting processes. The Pittsburgh Post-Gazette editorial board opposed his appointment on those grounds.

The ad also repeats the misleading claim that Corbett’s 2011 budget proposal cut over $1 billion from public education. The deficit was the result of the expiring stimulus funds; though overall schools saw a cut, the state’s spending on the Basic Education Fund (BEF) actually increased.

Clarification: Numerous readers have noted that though state funding for BEF increased, overall education funding decreased by approximately $150 mil from FY 09/10 to the current budget, FY10/11. It’s significant, though not as devastating as $1.3 billion.

The buy is the same as last time: on cable in the Harrisburg market and on network television in the rest of the state. Jackson said the the total buy was in the hundreds of thousands of dollars.

Corbett spokesman Kevin Harley reiterated his criticism of Jackson, noting that he previously consulted for Democrats that Corbett prosecuted as Attorney General.

“Once again we hear from the former media consultant for convicted felon Bill DeWeese and the recipient of more than half a million in fees from the House Democratic Campaign Committee at a time it was under the thumb of convicted felon Mike Veon,” Harley said.

In addition to DeWeese and the HDCC, Jackson has worked for a number of Democrats in PA and elsewhere, including Arkansas Lt. Gov. Bill Halter’s Senate campaign, and previously that of Illinois Sen. Roland Burris. In PA, he’s currently consulting for Eugene DePasquale for Auditor General.

“We leave it to others to decide Bud Jackson’s motives. But it should be clear to everyone that we are dealing with a remnant of machine politics in search of attention,” Harley added.

Jackson says the funding for the ad came entirely from donors in PA, and that he personally had not contributed money to the effort. But he would not give further details about the group’s financial backers, disclosure of whom are not required by the law.