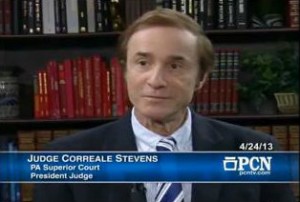 Stevens will fill the vacancy created by the conviction of ex-Justice Joan Orie Melvin in March. The AP cited two sources close to the Governor.

”A 3-3 decision by our court is meaningless.”

The state constitution calls on the Governor to nominate a replacement, who will serve until a permanent Justice is elected in 2015.

But there’s a hurdle: the appointee must win a supermajority 34 votes in the state Senate. The GOP caucus numbers only 27, meaning at least 7 Democrats must vote for Corbett’s pick.

Sen. Daylin Leach (D-Montgomery), Minority Chairman of the Senate Judiciary Committee, in April publicized a list of five Republican judges who he said could pass the Senate Dems’ muster. Stevens was among them.

“Interesting names he put there,” was the Governor’s short response, according to the Patriot-News.

Ultimately Corbett decided to avoid the fight. With showdowns looming on several big-ticket legislative items, he can ill-afford another political impasse.

Stevens, 66, currently presides over the Pa. Superior Court. He was first elected in 1997 and retained in 2007. He represented part of Luzerne County in the state House from 1981 to 1988 – where he was the chief sponsor of this bipartisan gem.

Stevens is said to have told the Governor that he was interested in the appointment.

Of his nominees for Supreme Court and state agencies, Corbett said, “These four individuals reflect the qualities and qualifications that transcend political labels and uniquely suit each one for the positions of public trust for which they have been selected.”

According to a press release, Gov. Corbett will submit all four nominations to the state Senate on Friday.