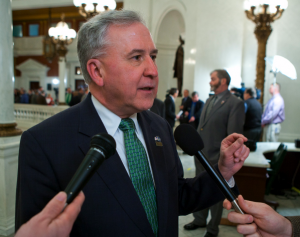 The Montgomery County businessman has raised and contributed millions of dollars to GOP campaigns over several decades.

“Bob Asher has been the top Republican fundraiser in Pennsylvania for a very long time, which says to me that people trust and respect his judgment. If you are a GOP political candidate for any important position in the state, your first assignment is to get the support of Bob Asher.”

He played a key role in Tom Corbett’s 2004 5.6 percent primary victory for Attorney General. Due in large part to Asher, Corbett earned most of the institutional support from the GOP’s southeast caucus over over Montgomery County District Attorney Bruce Castor.

Meanwhile, Dave Freed is leaning toward a run as well. At a crowded state committee reception he hosted on Friday night, the Cumberland County District Attorney said he was looking at a bid.

“I have not announced that I’m running for Attorney General. I have a DA race, and I want to be respectful to that race and to my county,” he said.

“I’m certainly very seriously thinking about it. I wouldn’t be here if I wasn’t. I do believe there’s room for a prosecutor in the race, and that’s where my head is right now.”

Freed has the support of many of his DA colleagues, by whom he is well respected.

However, with the support of Asher and most of his colleagues in the PA Senate, Rafferty is an early favorite for the seat.

“I’m getting a good reception, a very good reception. A lot of people are encouraging me to do something,” Rafferty said on Friday night.

On Saturday morning, he delivered a well-received “state of the Senate” address to GOP committee members. Rafferty ticked off a number of Republican accomplishments including tort reform and new regulations for abortion clinics. The Senate Transportation Committee Chairman also boasted of his forthcoming legislation promoting public-private investments in infrastructure.

“Senator Rafferty has clearly been in Harrisburg for too long if he thinks that partisan politics is more important than the idea that every Pennsylvanian’s voice counts,” said campaign spokesman Nat Binns.

“I like the idea,” Rafferty told PoliticsPA of Pileggi’s plan. “I think that what it’s going to do is enhance both parties, and hopefully the Republican party even more to get out the vote, because people are going to realize that one vote can make a big difference. And it also is going to bring the candidates into the districts now, instead of just pose for pictures in Philadelphia and Pittsburgh. They have to work the state now.”

Looking at the possible general election matchup, Rafferty sounded confident about the prospect of facing Murphy.

“Met him once, seemed like a nice guy. But I think when you look at my record versus his record, you’re going to see that I have the experience and the wherewithal to be a great Attorney General,” he said.