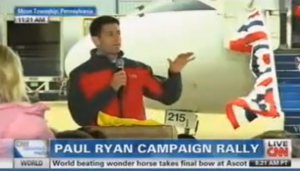 At a speech delivered just over 15 miles from downtown Pittsburgh in Moon Township, Paul Ryan preached to the shivering crowd about the necessity of cutting back on government spending. As the wind blew American flags in every direction, Ryan and his Republican followers tried to blow over the past four years of Obama’s presidency, speaking of change.

It was his first visit to Pa. since August.

“We need to recognize once and for all that we can’t keep spending money we just don’t have,” said Ryan as he opened the speech in a tone equally as strong as the winds around him.

“We have got to get spending and the size of government under control,” he continued, pointing to what the Romney-Ryan campaign has deemed runaway government government spending during the Obama administration’s time in office.

The dramatic talk of drastic cuts was only fitting of a speech which Mr. Ryan entered into in such dramatic fashion; the vice-presidential candidate appearing out of a slowly opening airport hanger to the cheers of hundreds who showed up for the rally. “Here we go Ryan, Here we go!” echoed across Atlanta Aviation Airport.

“Look, the choice is this: Do we limit the size of our government, or do we limit the growth of our economy? Mitt Romney and I believe we need to limit government so our economy can grow,” he said, highlighting a clear-cut difference between the two candidates.

The Ryan and Romney supporters in attendance were not limited to voters, but a list of other notable Republicans including Sen. Pat Toomey, Republican Senate candidate Tom Smith, Congressional hopeful Keith Rothfus, and Rep. Tim Murphy. Smith, who is challenging incumbent Bob Casey (D) spoke at the rally.

“Having Paul Ryan in town helps illustrate who the real candidate is at the top of the ticket. As we’ve learned over the past few weeks, Mitt Romney will say anything to close the deal. After campaigning for President the past six years as ‘severely conservative,’ he’s now playing hide-and-seek with voters,” said Fitzgerald.

“As the President said yesterday, he’s got a case of something we call ‘Romnesia,’” echoing that Obama campaign’s latest go-to word to criticize Romney of flip-flopping.

Here’s a news clip of the event: