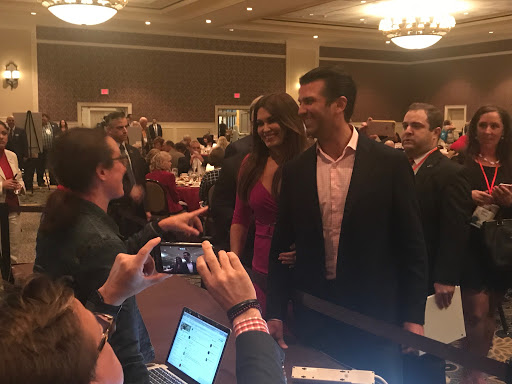 Donald Trump Jr and Kimberly Guilfoyle stopping by the press area to chat with Maggie Haberman of the New York Times.

HERSHEY — The message Friday night was clear: follow Donald Trump and Republicans will win in 2018.

There were no signs of tension between the President’s brand of politics and the party’s 2018 hopefuls at the Pennsylvania Republican Party Fall meeting this weekend.

Keynote speaker Donald Trump Jr. touted the Trump agenda as the road map to helping the party take back the Governor’s mansion and a seat in the United States Senate, while helping maintain majorities in Washington and Harrisburg.

“Donald Trump is on the ticket this November,” Trump Jr. said.

“They are going to govern with my father, like my father and for all of you.”

Trump Jr. and girlfriend Kimberly Guilfoyle, Vice Chairwoman of American First Action, a Pro-Trump Super PAC, spoke on Friday night at the Hershey Lodge boasting about the President’s performance in office and stressing the need to elect Republicans in Pennsylvania, specifically Scott Wagner for Governor and Lou Barletta for U.S. Senate.

“Pennsylvania is Trump country, we all know that,” said Pennsylvania Republican Party Chairman Val DiGiorgio. He said Trump Jr.’s presence had attracted all time highs in attendance and fundraising for a fall state committee dinner.

Trump’s victory in Pennsylvania was a pivotal moment on Election Night, and the speakers reassured those in attendance of how important a role the keystone state played in 2016 and will play this year.

“We have Pennsylvania to thank for the historic presidency of Donald Trump. That was a big one,” Guilfoyle said. “The battle is about to heat up… just 45 days because Democrats want to reverse every single accomplishment of this fearless President has been able to achieve for this country and we won’t let that happen.”

A major theme throughout the weekend was boasting about the current state of the economy, for which they credited Trump.

“There’s no question that we are winning,” said Trump Jr. “Name one economic metric where we are not better off substantially today then we were two years ago, name one.”

Republicans around the country are bracing for a difficult midterm election and Trump’s job approval rating in Pennsylvania is in negative territory. Yet the president is a political sun – and candidates in PA probably couldn’t escape his orbit even if they tried. Some candidates who had voiced criticism or concern with Trump – like Congressmen Ryan Costello and Charlie Dent – resigned rather than seek re-election. 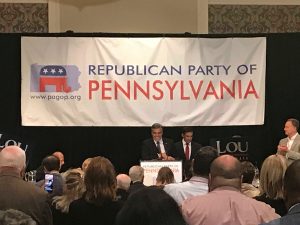 Barletta, one of Trump’s earliest supporters and co-chairman of his Pennsylvania campaign in 2016, joined in on the praise for the economy and joked that everyone was finding work.

“Not even the far left can deny that the economy is soaring. The economy is so good that even Colin Kaepernick found a job,” he joked. Barletta has echoed the President’s criticism of NFL players who protest during the national anthem.

While boosting Trump and conservative ideals, Republicans also attempted to paint Gov. Tom Wolf, Sen. Bob Casey and the modern Democratic Party as out of touch with Pennsylvanians.

“This coming election is of truly historic consequences,” said DiGiorgio. “We as Republicans now know, the world knows, that we’re engaged in a battle with the socialist left.”

The GOP chairman also specifically called out three Democratic candidates in Pennsylvania in closely watched races for “embracing” these ideas. 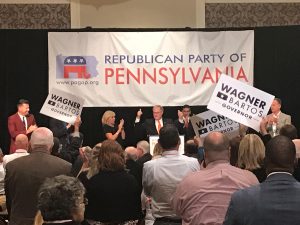 Wagner and company described Gov. Wolf as the most liberal Governor in America and delivered very pointed attacks to contrast himself with his Democratic opponent.

“This governor is probably the biggest special interest Governor that this state has ever seen,” Wagner said. “He’s out telling everybody that I’m going to tax your retirement income. It is an outright lie and I want the people of Pennsylvania and those of you that are watching PCN today, that this guy is a gutless coward and he is lying to the people of Pennsylvania.”

The Wagner and Wolf campaigns have frequently jousted over the senior vote through ads stating the other is going to increase their taxes.

On Saturday, Barletta spoke of his career in elected office defeating incumbent Democrats in Hazleton and how far the party and Casey has shifted.

Barletta said Casey has abandoned Pennsylvania values when Casey decided to announce his no vote on Trump’s Supreme Court nominee before it was even announced.

Although the economy is a rallying point for the GOP, the focus shifted a couple times on popular culture topics that the President and some Republicans have enjoyed weighing in on.

Leading into the Pledge of Allegiance Friday night, those in attendance were asked to stand and seemingly took a shot about those who kneel for the National Anthem.

“And now if I can ask you to rise, I know that won’t be a problem with this crowd,” the speaker said.

Guilfoyle’s address included proudly aligning themselves with guns and religion and stating the other side doesn’t stand up for what’s right.

“Trump derangement syndrome is very real,” Guilfoyle said. “…Not in Pennsylvania, not in this country, we never take a knee in America to anybody.”

Trump Jr., credited Pennsylvania for molding him during his “formative years,” since he attended the Hill School in Pottstown and the University of Pennsylvania and described the residents in the commonwealth as “real Americans.”

During the 2016 campaign, while Trump was making his plea to voters in urban areas, he notably asked, “What the Hell do you have to lose?”

Barletta and Wagner, echoing these exact words, both discussed Democrats taking minorities votes for granted and believe the current low unemployment rates for people of color show that they should be elected.