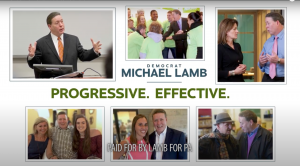 Lamb’s 15 second spot touts endorsements from various labor, teacher, and firefighter unions across the state and points to his experience in public office as proof that he believes that he’s the candidate best equipped to serve in the statewide office.

“For Auditor General, labor, teachers, and firefighters support Michael Lamb, because Lamb has the most experience cutting waste, and reforming government. Progressive, effective, Michael Lamb, the Democrat,” a voiceover reads in the 15 second ad.

The Lamb campaign said that the TV ad buy is in the six-figure range and went to television on Saturday May 16 and is expected to remain on the air through the election. A spokesperson added that the television ad is being aired in five different markets in the state: Erie, Johnstown-Altoona-State College, Lehigh Valley, Pittsburgh, and Scranton-Wilkes-Barre. The Lamb campaign said that the television ad is on broadcast in each of those five markets, while the ad is on both broadcast and cable in some markets.