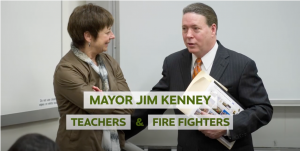 Pittsburgh City Controller Michael Lamb is back with an ad aiming to court voters in the southeast.

Lamb, who is one of six Democrats seeking the party nomination for Auditor General, released a 15 second television ad that touts being endorsed by the mayor of the largest city in the state, coupled with support from various groups.

“Mayor Jim Kenney, teachers, and firefighters, support Michael Lamb for Auditor General, because Lamb has the most experience taking on public corruption,” a voiceover reads in the 15 second spot. “Progressive, effective, Michael Lamb, the Democrat.”

According to a spokesperson from the Lamb campaign, this second television ad of the campaign started airing over this past weekend and will run through the week in Southeastern Pennsylvania. This specific TV ad buy is in the five figure range.

The ad is nearly identical to the first television spot that the campaign released that promoted Lamb’s experience in office and support from various labor, teacher, and firefighter unions across the state. However, that specific ad is running in five different markets in the state: Erie, Johnstown-Altoona-State College, Lehigh Valley, Pittsburgh, and Scranton-Wilkes-Barre, not in the southeast, like the second ad that features Kenney.

Lamb is one of a few candidates in the race to have television ads on the air. Former Deputy Mayor of Philadelphia Nina Ahmad has a 30 second ad that highlights her experience leading up to this run for the statewide office, while promising to hold the government accountable and take on drug companies. State Rep. Scott Conklin (D-Centre) released a minute long spot showing the candidate driving around the state with his dog, Lucy, as he pitches a message of unity in response to the coronavirus pandemic.