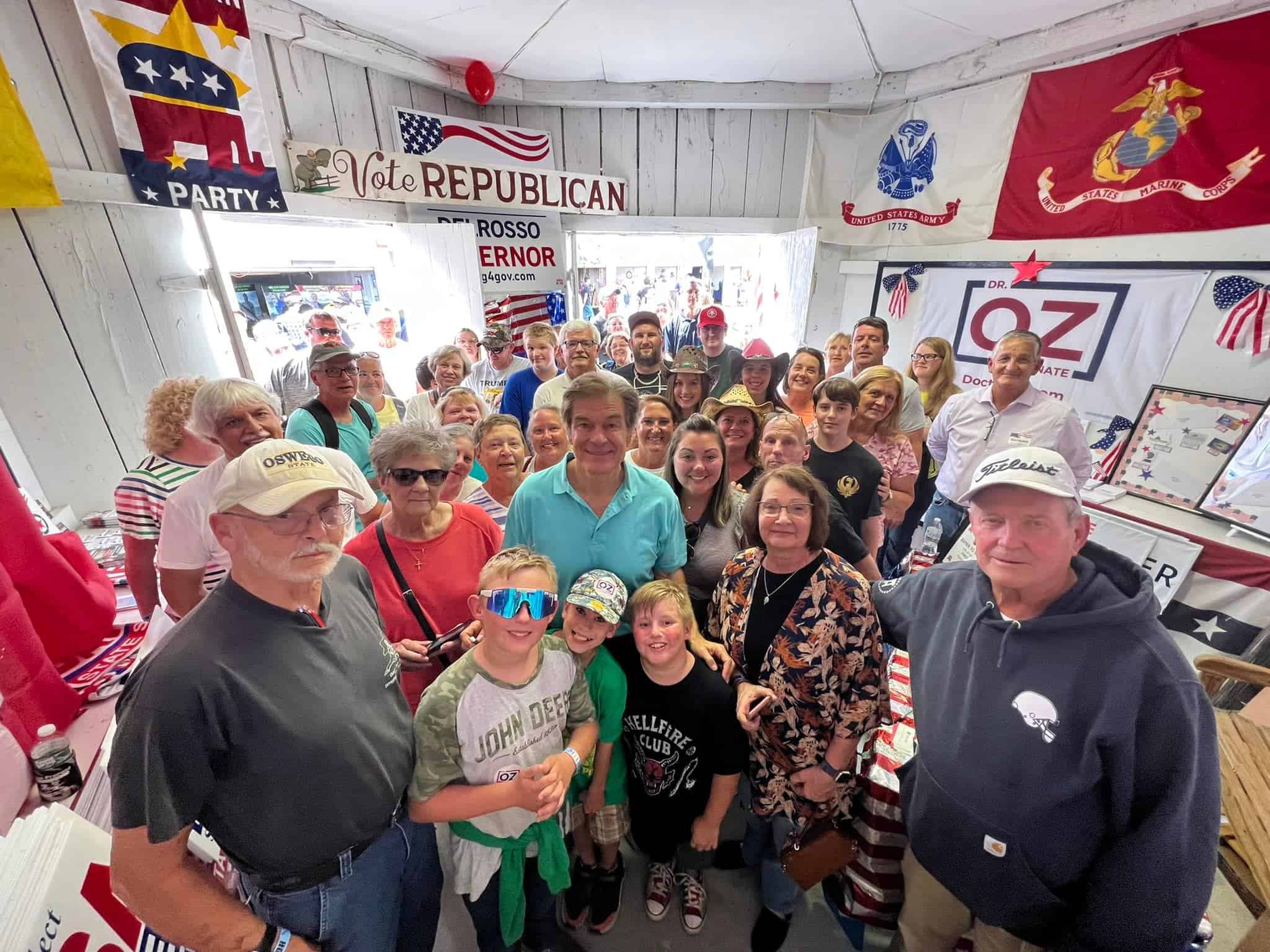 I’ve got Friday on my mind. Today is the start of high school football season in the Commonwealth

POLITICO reports this morning that Mehmet Oz sees an opportunity to get back into the chase for Pennsylvania’s open Senate seat and it is right up his medical alley.

The campaign this week hit back at John Fetterman about his health – first with a shot at his diet and then on his ability to debate Oz and handle the job.

Oz’s efforts have led to a much-needed show of support for him among voices trusted by Republican voters, including on social media, where he has been hammered by Fetterman as an out-of-touch carpetbagger from New Jersey. But the fact that he is still working to shore up his standing with the GOP rank-and-file this late in the summer underscores his challenges in the election, and could detract from his efforts to win over independents. (POLITICO)

Oz Ratchets Up Questions About Fetterman’s Health As PA Senate Race Gets Acrimonious. “Mehmet Oz was quick to wish John Fetterman well and offer prayers as the Democrat recovered from a stroke earlier this year. But now that the two are officially facing each other in one of the highest profile Senate races of 2022, the Republican Senate nominee and his campaign aides are making clear that they view their Democratic opponent’s stroke — and lingering health issues that have impacted his speech — as fair game in the general election.” (CNN)

2. How Election-Denying GOP Governors Could Tilt the 2024 Presidential Election

“Republican candidates who claim that the 2020 election was stolen from Donald Trump have been nominated for governor in four critical swing states, raising concerns that if elected they could try to sway election results in 2024 and beyond.

In Arizona, Pennsylvania, Michigan and Wisconsin, Republican primary voters elected a candidate who has denied the results of the 2020 election and believes that voter fraud influenced the results. GOP voters also nominated an election-denying candidate in Maryland, though he has less chance of winning in a blue state.

Many more Republican gubernatorial candidates have questioned whether the 2020 election was legitimate or refused to say that President Joe Biden was the rightful winner. But these five are more vocal election deniers, who would be willing to call for audits or move to decertify results.” (Pennsylvania Capital-Star)

Mastriano’s Religious Values Resonate With Supporters, But Poll Shows Him Down Among Republicans. “Supporters who attended Republican gubernatorial nominee Doug Mastriano’s campaign events in suburban Philadelphia this week said his campaign messaging hits all the right notes for them.” (Pennsylvania Capital-Star)

Republicans Eye Traditional Pivots in Purple States, But This Time It Won’t Be Easy. “Republicans seeking gubernatorial and Senate seats in swing states like Arizona, Pennsylvania, Wisconsin and elsewhere are already indicating they’ll change their tone on hot-button issues — a swivel some operatives say is borne out of necessity in their narrowly divided states.” (ABC News)

Fetterman’s, Shapiro’s Leads Might be Narrowing in PA’s Midterm Races. “A complicated picture of the races for U.S. Senate and governor is starting to form as polling picks up ahead of Pennsylvania’s closely watched midterm elections in November.” (Philadelphia Inquirer)

“The Biden administration is taking a victory lap after the President signed an executive order to forgive $20,000 in student loan debt for Pell Grant recipients and up to $10,000 for millions of others.

PoliticsPA decided to take a look at the undergraduate alma maters of Pennsylvania’s Senate and gubernatorial candidates, as well as its congressional delegation, to see what is the 2022-23 cost of tuition, room and board and total cost, as well as the median federal debt that students carry along with their diplomas upon graduation.

What did we find?” (PoliticsPA)

How Biden Finally Got to ‘Yes’ on Canceling Student Debt. “For months after he had entered office, President Joe Biden had punted on his campaign promise of forgiving up to $10,000 in student loans. And as the debate over what to do lingered, aides began to take steps to try and manage internal deliberations.” (POLITICO)

The Economic Arguments For and Against Biden’s Student Debt Relief Plans. “President Biden’s plan to erase up to $20,000 in college debt for tens of millions of borrowers is drawing praise and criticism. Some welcome relief, but others say he should address tuition costs.” (NPR)

Democrats Trying to Flip PA House Were Cautiously Optimistic. The Abortion Decision Changed the Game. “Conventionally speaking, the party in control doesn’t usually do well in a midterm,” said the head of the House Democrats’ campaign arm. “But abortion has mobilized people.”(Philadelphia Inquirer)

Cartwright to Donor: Stop Using Me in Camp Lejeune Ad. “Cartwright appeared in TV commercials praising the law firm of Parker Waichman and partner Jerry Parker for their representation of U.S. servicemen and family members affected by widespread water contamination at Marine Corps Base Camp Lejeune in North Carolina.” (PoliticsPA)

Lancaster County Board of Elections Complies With Order to Count Undated Mail-In Ballots. “Lancaster and two other counties have complied with a court order to include improperly dated mail-in ballots in their certified election results for the May primary election, LNP | LancasterOnline has learned.” (LNP | Lancaster Online)

The Philly GOP Ousted Him For Possible ‘Ballot Harvesting’ Last Election. He’s Back to Help Them (And the Green Party). “Billy Lanzilotti is among a group of Republicans who gathered signatures to put Green Party candidates on the ballot in hopes of siphoning votes from Democrats. The GOP says it doesn’t want his help.” (Philadelphia Inquirer)

Teacher Fired in Wake of Jan. 6 ‘Stop The Steal’ Rally Attendance Sues Allentown School District. “The Allentown teacher who claims he was fired for attending the “Stop the Steal” rally that preceded the storming of the Capitol has sued the school district, saying it violated his constitutional rights and opened him and his family to death threats.” (The Morning Call)