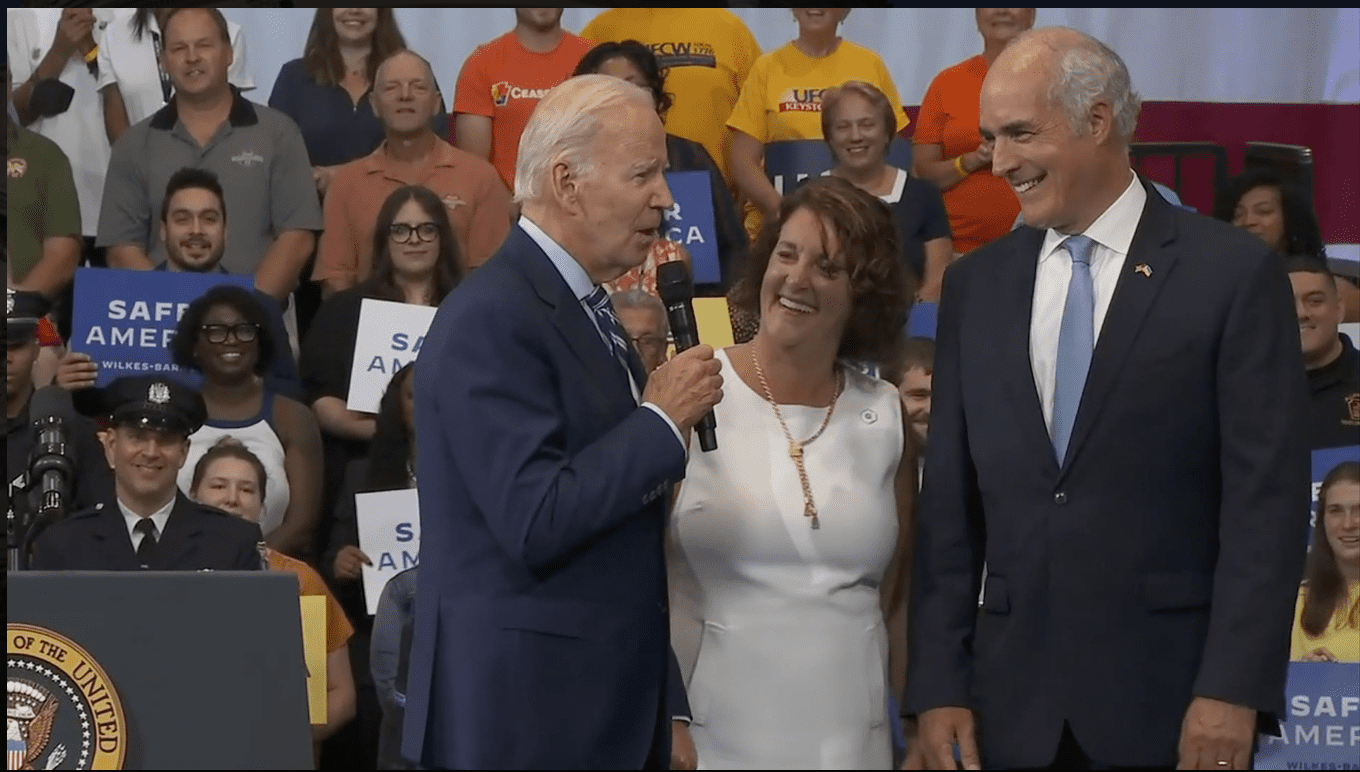 Good Wednesday morning. It’s the last day of August. Make it a good one.

1. Biden To Republicans: ‘You Can’t Be Pro-Law Enforcement and Pro-Insurrection’

President Joe Biden made good on his promise to reschedule a visit to Wilkes-Barre today with a 35-minute speech at the Marts Center on the campus of Wilkes University.

The 46th president focused on law enforcement and his Safer America Plan – his administration’s crime-prevention effort. Biden also took the opportunity to tell Congress to bring back the federal ban on assault-style weapons that was allowed to expire in 2004.

“To my MAGA Republican friends in Congress, don’t tell me you support law enforcement if you don’t condemn what happened on the 6th,” he told the audience. “For God’s sake, whose side are you on? (PoliticsPA)

Biden Stresses Police Funding, Crime Prevention in Visit to Political Battleground Pennsylvania. “Biden’s visit is the first of three over the next week in the political battleground state that is crucial to deciding control of Congress and the 2024 presidential election.” (Washington Post)

Biden and Trump Visits Have Pennsylvania Elections Back in The National Spotlight. “President Joe Biden and former President Donald Trump will make four stops in Pennsylvania in seven days, showcasing the importance of the state’s elections for governor, Senate and U.S. House.” (Philadelphia Inquirer)

John Fetterman, the Democratic nominee for an open Senate seat in Pennsylvania, rejected Mehmet Oz’s offer to hold their first debate next week, saying the GOP candidate’s campaign thinks “it is funny to mock” his recovery from a stroke.

“I’m eager to put my record and my values up against Dr. Oz’s any day of the week,” Fetterman, the lieutenant governor, said in a statement Tuesday evening. “As I recover from this stroke and improve my auditory processing and speech, I look forward to continuing to meet with the people of Pennsylvania.”

Fetterman added that a list of debate “concessions” from Oz’s campaign team earlier in the day “made it abundantly clear that they think it is funny to mock a stroke survivor.” (NBC News)

Dr. Oz Learns That All Politics Is Local In Run For Pennsylvania Senate Seat. “The late speaker of the House of Representatives Thomas (Tip) O’Neill Jr., the product of an enclave of Cambridge, Mass., known as Barry’s Corner, had perhaps the greatest insight in American politics when he declared “all politics is local.” Dr. Oz is learning that every day here. He’s not local.” (Globe and Mail)

“Mr. Mastriano’s rise from obscure and inexperienced far-right politician to Republican standard-bearer in Pennsylvania’s governor’s race was swift, stunning and powered by social media. Although he is perhaps better known for challenging the results of the 2020 presidential election and calling the separation of church and state a “myth,” Mr. Mastriano built his foundation of support on his innovative use of Facebook in the crucible of the early pandemic, connecting directly with anxious and isolated Americans who became an uncommonly loyal base for his primary campaign.

He is now the G.O.P. nominee in perhaps the most closely watched race for governor in the country, in part because it would place a 2020 election denier in control of a major battleground state’s election system.” (New York Times)

How PA’s Gubernatorial Candidates Differ on Educational Priorities. “Democratic nominee Josh Shapiro and Republican nominee Doug Mastriano have laid out different priorities in their education policies were they to become governor.” (WESA)

Jim Bognet’s Work for Saudi-Funded Lobby Centered in New Attack Ad. “Before joining the Trump administration, Jim Bognet, a Republican candidate for Congress in Northeastern Pennsylvania, was a senior vice president at one of Saudi Arabia’s most powerful lobbying firms in Washington, D.C. — a tenure that a Democratic super PAC plans to make a major issue in one of the country’s most important House races.” (The Intercept)

Bognet Calls Cartwright, ‘Biden’s Lap Dog’ “In a press call prior to President Joe Biden’s visit to Wilkes-Barre this afternoon, Republican candidate for Congress Jim Bognet called out his opponent, incumbent Democrat Matt Cartwright, as a “lap dog” for the President.” (PoliticsPA)