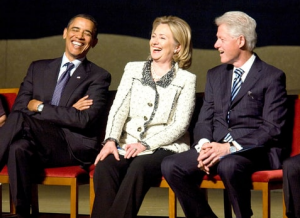 The 2016 Democratic nominee’s first political convention was held by the Grand Old Party.

In 1968, Hillary Rodham traveled to Miami for the Republican National Convention at the invitation of New York Congressman Charles Goodell (father of Roger). He wanted the Wellesley student’s help in a Draft Rockefeller effort.

Rodham witnessed Richard Nixon accept the nomination and touch off his “law and order” campaign by pledging to fight for “the voice of the great majority of Americans, the forgotten Americans.”

When she left Miami, she also said goodbye to the Republican Party forever.

Later that month, the Chicago native would wander out to see the tumult that overtook the Windy City during the Democratic Convention. She watched the protests in Grant Park, and when she went back to Wellesley sought to study and dissect the work of a Chicago community organizer.

At the same time in Shreveport, Louisiana Bill Clinton was accompanying his mother’s new boyfriend on a business trip. No doubt eyeing him warily after all he’d been through with her last husband.

On the other side of the world, a seven year-old boy named Barry Obama was adjusting to life with his new step-father in the exotic land of Indonesia.

By 1972, Obama was back in Hawaii while Bill and Hillary were already a political and personal couple. Together they were managing McGovern’s campaign in Texas. Three years later, they were married. Not long afterwards, Bill was running for Attorney General of Arkansas while Hillary ran Jimmy Carter’s Indiana campaign.

Through the 1980’s, the Clintons (Hillary added the last name along the way) rose up the political ladder. Meanwhile, Obama graduated from Columbia University in New York City and then traveled to Chicago to become a community organizer, the career Hillary once studied.

In 1992, their political paths first began to converge. After an arduous journey, Bill and Hillary celebrated winning the Democratic nomination in Madison Square Garden. In Chicago, Barack was taking his first political steps by leading Project Vote’s effort to register blacks throughout Illinois.

Chicago hosted the next quadrennial gathering in 1996. It should have been the first occasion where Barack Obama met the Clintons. Hillary was coming back home with her “it takes a village” philosophy. Bill was on the road to being re-elected and introduced his “bridge to the 21st century”. Barack was running his first ever campaign for the Illinois State Senate.

The political newcomer, though, wasn’t exactly enthused about the celebration.

“The convention’s for sale, right?,” he told the Cleveland Plain-Dealer. “You’ve got these $10,000-a-plate dinners, Golden Circle Clubs. I think when the average voter looks at that, they rightly feel they’ve been locked out of the process. They can’t attend a $10,000 breakfast. They know that those that can are going to get the kind of access they can’t imagine.”

In fact, there’s no indication Obama even set foot in the United Center that week.

Fast forward four years and it was a much different story for him as well as the Clintons.

Bill was popular but still radioactive thanks to that woman and her stained blue dress. Hillary, on the other hand, was finally venturing out on her own. Running for New York’s open Senate seat, she was taking a tremendous leap of faith into the arena.

Barack Obama, however, was at the nadir of his political career. He tried to primary Congressman Bobby Rush and got embarrassed. That defeat made the preternaturally serene man make a uncharacteristically rash decision to join some friends on their trip out to Los Angeles.

His American Express card was rejected, twice, while trying to rent a car and he couldn’t get a floor pass. Obama was left to watch the Clintons speak on TVs scattered throughout the Staples Center. After two days he gave up and flew home.

Just four years later, he stole the show from everyone with a rousing keynote that brought all in attendance (including Hillary) to their feet. Not since William Jennings Bryan has a convention speech catapulted someone to such national prominence. He also swept the Clintons, who spoke the previous day, out of the news cycle and became the star not only of that week but of that year.

Nonetheless, that wariness towards conventions still lingered in him. In his second book, The Audacity of Hope, Obama would recount how he gave a pained political answer when then “Meet the Press” host Tim Russert asked him to square his 1996 comments with the Democratic Party’s fundraising practices.

“Privately, I thought my original 1996 quote was better,” he wrote.

In 2008, after their legendary primary battle, the entire convention revolved around the question of whether Obama’s and Clinton’s supporters could reconcile.

Hillary played the good soldier and was given the headline spot on the second night. Bill was more subdued, merely going through the motions. The new Democratic nominee had suggested he didn’t feel the 42nd President had made enough of an impact and Obama’s refusal to accept corporate and lobbyist cash was seen as an implicit shot at the Clinton legacy.

At that point, Obama extended an unexpected olive branch. He wanted Hillary Clinton to be his Secretary of State. Bill was thrilled, the new President was not seeking to destroy the Clinton dynasty, yet Hillary was unsure. Eventually, the challenges of the job (not to mention the popularity that comes with the position) proved too tempting to pass up.

Then circumstances changed as President Obama now needed his predecessor’s help to win a second term. President Clinton’s dreams of economic stimulus and health care reform were at last realized in his Democratic successor’s first term but the electoral results remained the same. Like Clinton, Pres. Obama suffered a major midterm defeat and his re-election chances were highly doubted.

44 sought out 42 for guidance, inviting him to the White House (a visit that produced this classic photo) and sending his top political advisors to discuss strategy with him.

The partnership culminated in Clinton’s 2012 DNC address, where he made a better case for a second Obama term than the President himself did. Pres. Obama would subsequently dub Clinton his “Secretary of Explaining Stuff”.

Hillary was forced to miss the Charlotte gathering because of her Secretary of State duties. It was the first DNC she hadn’t attended since that fateful year of 1968. Her office did release a photo of her watching Bill’s speech, though, and with her favorable numbers at all-time highs chatter was already starting that she would take the prize in four years time.

So now, after literally decades of anticipation, Philadelphia is the home to Hillary Clinton’s convention. Bill Clinton, however, is once again metaphorically handcuffed due to the danger that he could overshadow his wife. Therefore, he’s been shifted to the second day of the convention.

Instead it will be President Obama making the case for Hillary Clinton on Wednesday, returning the favor that Bill gave four years ago.

All three of them have so much on the line this year. Bill needs to help his wife succeed, colored by the complex reality that he has been both her biggest champion and the source of frequent missteps. Barack desires to protect his legacy by handing the baton to his chosen successor (a feat only Ronald Reagan has achieved in modern times).

Finally, after a lifetime of triumphs, tragedies and self-inflicted wounds Hillary Clinton has the chance to become the first female President in American history.

The man standing in her way? A “law and order” Republican, much like the man that drove her out of the GOP.

There’s an apocryphal Mark Twain quote, “History doesn’t repeat itself, but it does rhyme.”

A new stanza will be written in Philadelphia this week.