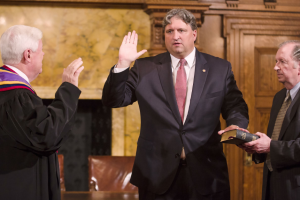 After being sworn in, Beemer kicked out Kane’s top appointees and brought in a new wave along with him. Now, the office has announced another set of promotions.

“Dave, Tony, Bob and Amy are respected throughout the Office of Attorney General,” Attorney General Beemer stated. “They are all talented professionals who have long been assets to this office. I am confident they will continue to provide the leadership and integrity that have helped them earn the respect of their colleagues.”

The AG’s office provided the following biographies of the four individuals who’ve been promoted:

Zapp has been a Deputy Attorney General since 1978. Her tenure with the Office of Attorney General includes nearly 20 years in the OAG’s Civil Law Division, where she primarily worked on cases involving state prisons and state agencies in the criminal justice system.

She was part of a team of attorneys that successfully fought the appeals of Lisa Lambert, a woman serving a life sentence following her conviction for the gruesome 1991 murder of her romantic rival in Lancaster County. The case garnered considerable attention, including from the national media.

Zapp in 2005 represented the Commonwealth before the U.S. Supreme Court in the case of Rompilla v. Beard, in which a convicted murderer challenged his conviction using the argument that his counsel failed to properly present mitigating evidence.

Recently, Zapp has successfully represented the Commonwealth in the case of Chester v. Wetzel, a class action in which death row inmates challenged the lethal injection process on the grounds that it constitutes cruel and unusual punishment.

A Wilkes-Barre native, Zapp studied French at Wilson College, where she earned her bachelor’s degree. She is a graduate of the Temple University James E. Beasley School of Law.

Ellis joined the Office of Attorney General in 1990. He has worked in many roles, including as a supervisory special agent in the Environmental Crimes Section, supervisor of the Clandestine Lab Enforcement Unit, Deputy Chief of the Bureau of Criminal Investigations and Regional Agent in Charge of OAG BNI Region V, which is tasked with investigating narcotics trafficking in North Huntingdon and the surrounding areas.

Ellis was tasked to lead the investigation of the 2002 Quecreek Mine collapse in Somerset County. A rescue effort led to the safe rescue of nine miners who were trapped underground for more than three days. A statewide investigating grand jury that probed the matter produced a report that recommended changes to improve the mining regulatory system to ensure the safety of coal miners in Pennsylvania. The investigation involved the testimony of 38 individuals and the review of thousands of documents.

Prior to joining the OAG, Ellis worked for the Altoona Police Department, where he served as a patrolman and later worked on vice and narcotics cases. He earned his Act 120 certification from the State Police Southwest Training Center.

Ellis will take over for David Peifer, whose retirement from the Office of Attorney General will take effect Friday.

The Bureau of Special Investigations was formed to support the investigative, regulatory programs and prosecutorial efforts of all of the various entities within the OAG Criminal Law Division. BSI includes the units and programs that provide expertise and support in the areas of child predator investigations, intelligence gathering and analysis, special operations agents, computer forensics, electronic surveillance and technical support. BSI staff also provides training, research and planning programs.

Sassano has worked for the Office of Attorney General since 1999. He was the lead agent on the team that investigated and successfully prosecuted convicted pedophile Jerry Sandusky.

Since 2012, Sassano has served as the Regional Agent in Charge of the OAG BNI Region IV that investigates narcotics trafficking in State College and the surrounding 14 counties. In this role, Sassano has led successful investigations of complex narcotics distribution rings and other drug traffickers. He also has worked as the coordinator for the Blair County Drug Task Force.

Prior to joining the OAG, Sassano worked for 20 years at the Altoona Police Department. He worked for seven years as a patrolman and 13 years as a detective. He was the lead detective in the case of James Franklin Rodgers, a Blair County man who was convicted in the 1988 fatal stabbing and robbery of a 72-year-old Altoona resident. The case was one of the first cases in Pennsylvania in which there was a judicial determination that DNA evidence is admissible.

Sassano studied at Penn State University, where he earned a bachelor’s degree in law enforcement and corrections.

Attorney General Beemer thanked Barbara Connelly-Sessamen for her work as the Acting Special Agent in Charge of the Bureau of Narcotics Investigations. She will continue to serve the OAG as the Regional Agent in Charge of BNI Region VIII, which investigates narcotics trafficking in Erie and the surrounding areas.

The primary mission of the Bureau of Narcotics Investigations is to conduct comprehensive investigations into the illegal activities of drugs traffickers operating throughout the Commonwealth.

Drawbaugh joined the Office of Attorney General in 2004. Prior to joining the office, he worked for 27 years at the Springettsbury Township Police Department in York County. During his tenure there, Drawbaugh spent 13 years working in the criminal unit, where he investigated a wide array of crimes, including homicides, thefts and child abuse cases.

After joining the OAG, Drawbaugh worked as an agent in the Bureau of Criminal Investigations. He was the lead agent on the “Bonusgate” investigation, which uncovered the illegal use of millions of dollars in taxpayer funds and resources for political campaign work. Recently, he has worked on the office’s investigations of Harrisburg’s finances and clergy sexual abuse that occurred within the Roman Catholic Diocese of Altoona-Johnstown.

Drawbaugh since 2012 has worked as the supervisory special agent overseeing the Bureau of Criminal Investigations Criminal Prosecutions Section in Harrisburg. He also previously supervised the OAG’s Harrisburg Child Predator Section. Drawbaugh is a graduate of the State Police Municipal Police Academy.