Biden and His PA Supporters Call for Unity 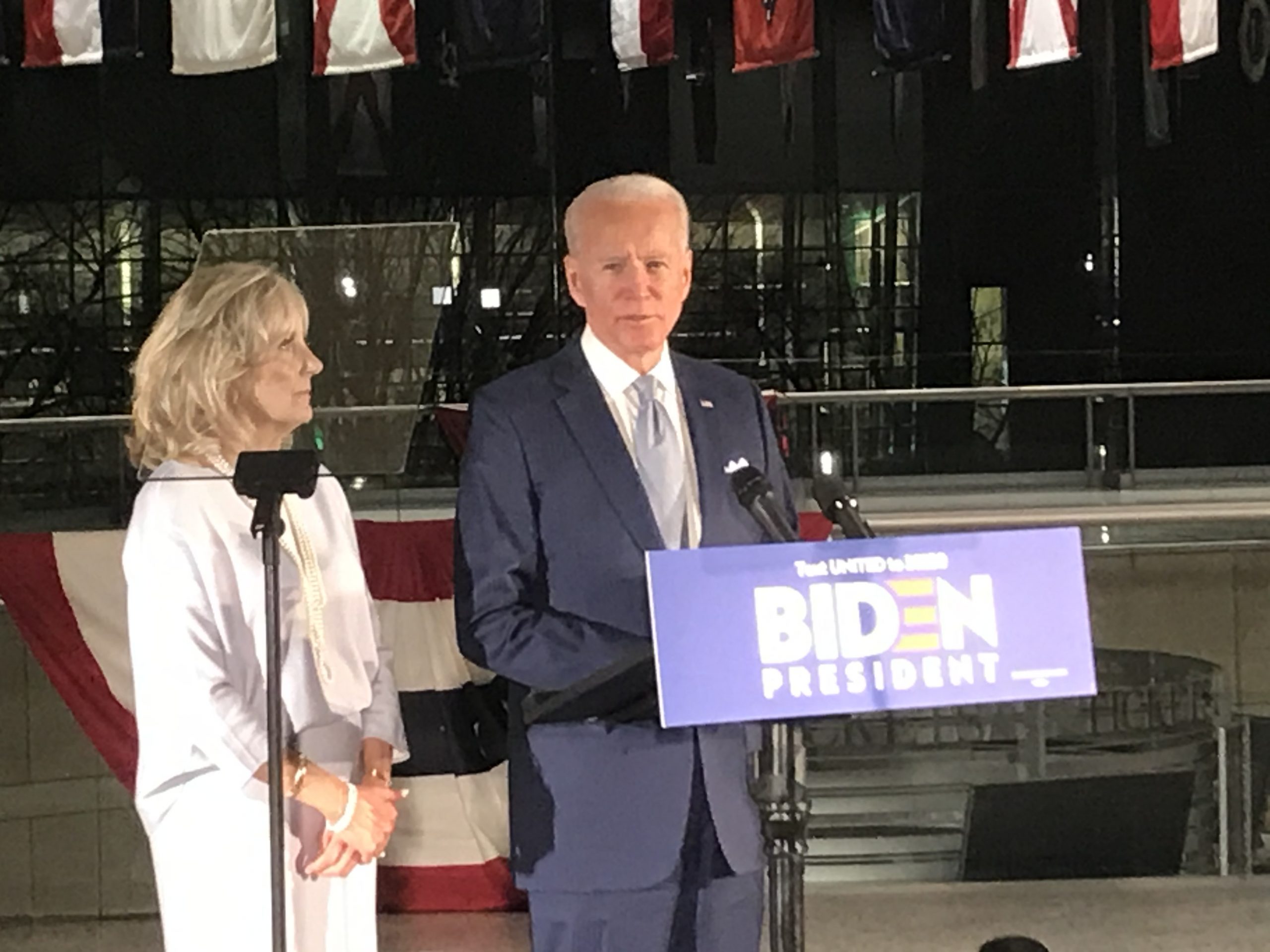 PHILADELPHIA- It wasn’t exactly the night former Vice President Joe Biden was anticipating, due to the cancellation of his rally planned in Cleveland over concerns about the coronavirus, but the results on Super Tuesday Part 2 was just what the Biden campaign needed to solidify his position as the prohibitive frontrunner in the Democratic presidential primary.

“Tonight we are a step closer to restoring decency, dignity, and honor to the White House,” Biden said to campaign staffers and members of the media on the second level of the National Constitution Center.

After a successful Super Tuesday last week that catapulted him into the delegate lead over Sen. Bernie Sanders, he earned comfortable victories in Michigan, Missouri, and Mississippi on Tuesday evening, inching him closer to securing the Democratic Party nomination.

While previous weeks have included jabs between Biden and Sanders, the message on Tuesday evening from the former Vice President and various supporters echoed his campaign launch in Philadelphia in May 2019 – a call to unity against President Donald Trump.

“I want to thank Bernie Sanders and his supporters for their tireless energy and their passion,” Biden said. “We share a common goal, together, we’ll defeat Donald Trump.”

State Rep. Malcolm Kenyatta (D-Philadelphia), an early endorser of the former Vice President, who campaigned for Biden in Iowa, New Hampshire, and South Carolina, was one of several elected officials present at the Tuesday evening gathering. He told PoliticsPA in an interview that he believes Biden’s message of unity has resulted in the recent significant swing in the primary.

“Tonight is yet another good night because voters are hearing his message,” Kenyatta said to PoliticsPA. “Voters want to beat Donald Trump, they want to unify the country and they want to get big things done that are going to combat some of the systemic discrimination that we’ve seen particularly in communities of color.”

Kenyatta also pointed to Biden’s roots in Pennsylvania, with the former Vice President being born in Scranton and his wife, Dr. Jill Biden, growing up in the Philadelphia suburbs, as a strength in their quest to flip the state back to blue in November and added that if Biden is at the top of the ticket, he expects a “big victory” in the keystone state.

Former Congressman and Philadelphia Democratic Party Chairman Bob Brady, another early supporter of Biden who was present at Constitution Center on Tuesday evening, told PoliticsPA he credits Biden’s momentum because they can “relate to him” and that families across the nation trust him.

While the focus hasn’t totally shifted quite yet to the general election, Brady made a plea to Sanders supporters to join Biden’s campaign in the effort to one terming Trump.

“And I wish that the Sanders people maybe would, you know, not let what happened with Hillary and have them stay home,” Brady said to PoliticsPA. “We need them, we want them, and want to make sure that they’re involved and make sure they get involved. The main gist of this is to get rid of Donald Trump.”

He added that without their energy behind Biden that Trump securing a second term was a possiblity.

Recent polling has shown mixed results for Trump in Pennsylvania.

A recent Morning Call/Muhlenberg College poll released within the last two weeks showed that Sanders had the best odds as the only Democrat defeating Trump head to head in the state by 3 points, while Biden was tied with Trump, although both results were within the margin of error. However, a Quinnipiac University poll released 20 days ago showed all of the Democratic presidential frontrunners leading Trump in the state with Biden holding the largest lead of 8 points and Sanders leading Trump by 4 points.

State Rep. Jordan Harris (D-Philadelphia), who also endorsed Biden’s bid for the White House, told PoliticsPA that he believes if Biden is at the top of the ticket that a lot of people would head to the polls in support of his bid against Trump. He specifically said that the former Vice President can positively boost turnout in Northeast Pennsylvania and Western Pennsylvania, areas in which Trump made significant gains in 2016.