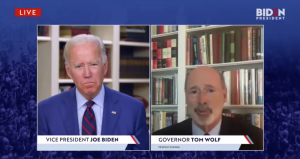 Just hours after announcing his support for the former Vice President’s presidential bid, Gov. Tom Wolf joined Joe Biden for a 35 minute virtual conversation on Wednesday morning about the impact that COVID-19 has had on Pennsylvania and the nation as a whole.

Although Wolf described the experience of handling the coronavirus pandemic as “uncharted waters,” Biden complemented his handling of the virus in the state, specifically lauding his plan to reopen the economy by different regions of the state and said that it should be a model for the rest of the nation.

“The kind of thing we should be doing nationally, is your reopening plan,” Biden said to Wolf. “You talk about three phases. Red, yellow, and green phase.”

Biden added that Wolf exercised “leadership from the beginning,” for the coronavirus pandemic, while surrounding himself with “really good people.”

Wolf echoed Biden’s sentiment by saying that “what’s good for southeastern Pennsylvania is very different from north-central Pennsylvania,” and returned the favor of complementing Biden as someone he believes would be a good leader to handle the pandemic.

“We could really use the leadership, I think, that you would bring to Washington,” Wolf said to Biden.

“When you and President Obama were in Washington, you exercised that.” Wolf added. “You also surrounded yourself with very good people.”

While Biden and Wolf agreed with one another and took subtle jabs at President Donald Trump for his response to COVID-19, the Pennsylvania Republican Party and the Republican National Committee were quick to criticize the both of them over the pandemic.

“It’s truly hard to tell which plan is worse for Pennsylvanians; Governor Wolf’s disastrous ‘one size fits all’ strategy for reopening Pennsylvania that faces bipartisan opposition, or Joe Biden’s anti-energy agenda that would wreak havoc on Pennsylvania’s economy,” said RNC Spokesperson Melissa Reed. “Regardless, Biden and his campaign have already proven that they have a losing message with Pennsylvanians.”

The Pennsylvania Republican Party specifically criticized Wolf over the percentage of COVID-19 related deaths that occurred in senior care facilities, Health Sec. Rachel Levine for moving her mother from a personal care home to a hotel, while also blaming the governor for the high unemployment rate in the state as well.

“The PAGOP hopes that Governor Wolf will confess to VP Joe Biden that nearly 80% of COVID-related deaths occurred in senior care facilities, but that he is wiping out Pennsylvania’s economy just the same,” PAGOP Executive Director Vonne Andring said in a statement. “We hope the Governor brags to the VP about his ‘one-size-fits all’ shut down of our economy, which turned a budget surplus into a $5 billion budget deficit.”

“For all of this, we hope VP Biden applauds the Governor, so that average Pennsylvanians may understand what’s to come for Pennsylvania under a Biden/Wolf/Levine regime,” Andring said in conclusion.

Polling over the past few months has shown Wolf has received widespread support from Pennsylvanians for his response to the coronavirus pandemic, while President Donald Trump’s ratings on the matter have been under water.

Despite the support from polling, Republicans have ratcheted up their criticisms on Wolf for his handling of the virus in recent weeks. A Philadelphia Inquirer story published last Wednesday morning titled, “Pennsylvania Republicans have a new campaign season villain and it’s not Nancy Pelosi,” shows that Wolf has turned into the target for GOP attacks within the state.

Tune in now as @TomWolfPA joins me for a conversation on how COVID-19 is impacting states: https://t.co/3gMLagg78X

According to polling since Biden emerged as the presumptive Democratic Party presidential nominee, the former VP holds an edge over Trump in the Keystone State. The Real Clear Politics Average shows Biden besting Trump by 6.5 points from polls conducted between March 6-April 26.