Biden Calls For Unity While Jabbing at Trump in Philly Address 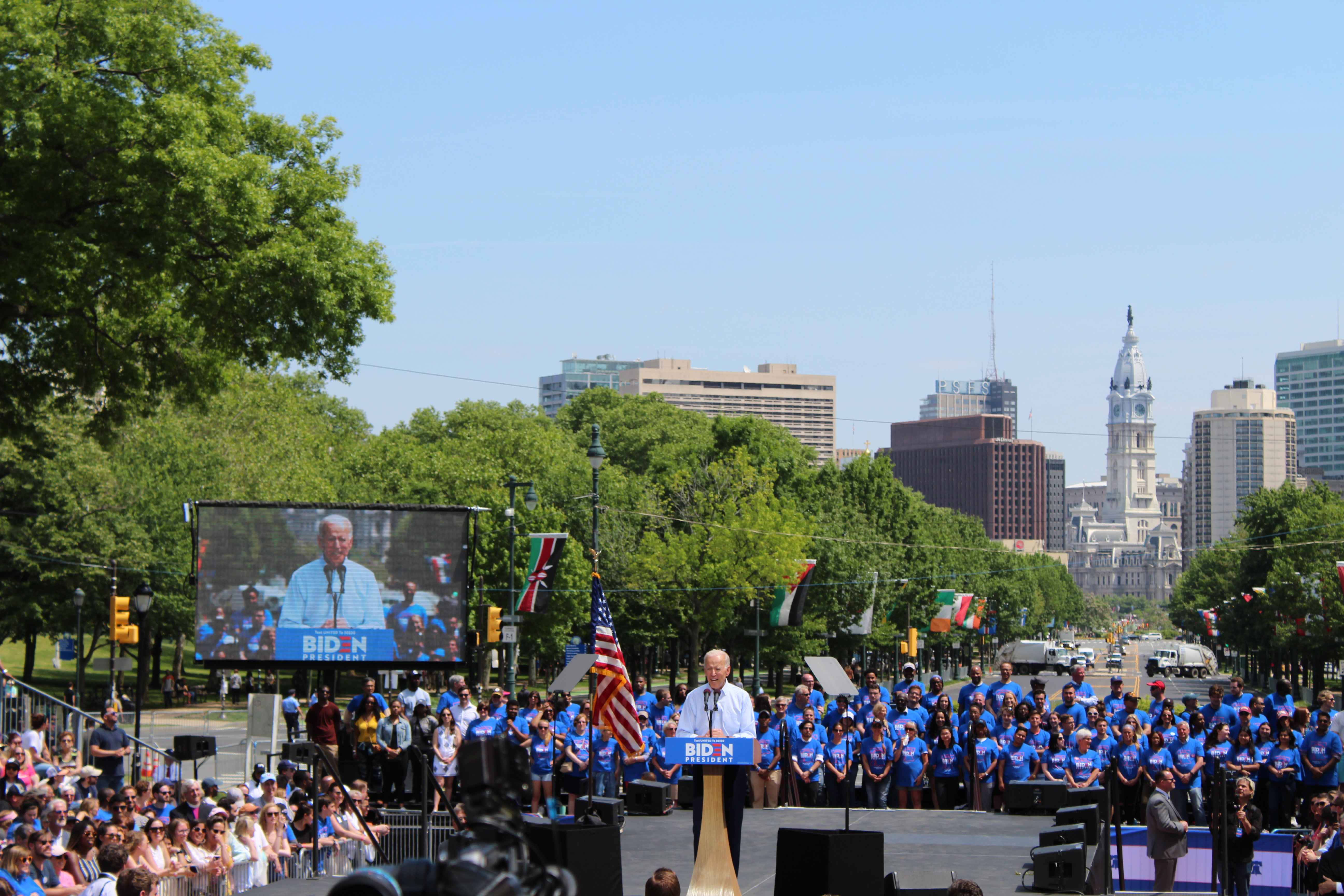 PHILADELPHIA- In the same city his campaign will be headquartered, former Vice President Joe Biden provided a speech calling for the country to unify, while delivering shots at President Donald Trump’s policies and character.

“This politics is pulling us apart, it’s ripping this country apart at the seams,” Biden said. “Our President is the divider in Chief.”

Biden’s speech today echoed many of the sentiments in his official presidential announcement video calling for restoring the soul of the nation and detailed hopping in the race to also “rebuild the backbone of the nation” and unite the country.

The long list of Democratic hopefuls hoping to one term Trump fall on various parts of the ideological spectrum within the party, but one thing that seems to unite the field is their fervent disagreement with the current administration. Biden balked at the claims that the Democratic candidate needs to be angry to win back the White House and said the party has unity in mind.

“Some say Democrats don’t want to hear about unity,” Biden said. “They say that Democrats are so angry, that the angrier a candidate can be, the better chance he has at being the Democratic nominee. Well, I don’t believe it. I believe Democrats want to unify this nation.”

“If the American people want a president to add to our division, to lead with a clenched fist, a closed hand, a hard heart, to demonize your opponents and spew hatred, they don’t need me,” Biden continued. “They’ve got President Donald Trump.”

Although Biden provided a bevy of criticism toward Trump, he didn’t display the same animus towards other Republicans. The former VP and longtime Senator talked about working across the aisle with Republicans during his decades in office and said it is still possible to work with the opposing party.

“Compromise itself is not a dirty word,” Biden said. “I know how to get things done. I know how to go toe to toe with the GOP, but it doesn’t have to be and it can’t be that way on every single issue.”

A recent Quinnipiac poll shows that 71% of Pennsylvanians say the state’s economy is “excellent” or “good,” which is significantly higher than numbers from recent years. Trump and the Pennsylvania GOP often point to the current economic numbers as proof that the Trump agenda is working for the state. Biden fired back at these claims today saying Trump inherited the economy from the previous administration and tied it in with a personal jab.

“I know President Trump likes to take credit for the economy and economic growth and the low unemployment numbers,” Biden said. “President Trump inherited an economy from the Obama Biden administration. Just like he inherited everything else in his life.”

Biden praised Obama throughout his speech for his character and said he was “never more proud” than the day the administration passed the Affordable Care Act.

Biden’s first appearance as a declared candidate was in Pittsburgh as he preached a middle class message at a Teamster Union Hall. While Biden’s campaign has yet to roll out a series of proposals, although he did promote a $15 minimum wage, a right to choose a public option like Medicare, free community college and called for a clean energy revolution in campaign speeches, his campaign’s main focus has all workers in mind says Symone Sanders, senior advisor to his campaign.

The rally comes at a time in which Biden, a native of Scranton, leads in various Pennsylvania primary polls, plus a recent Quinnipiac poll showing him leading Trump by 11 points in a hypothetical head to head matchup.

The Pennsylvania GOP issued a statement saying that Biden doesn’t offer a real vision for the country moving forward and said the previous administration was a failure, while acknowledging the former VP’s front runner status in the current primary.

“Joe Biden has thus far run a campaign that seeks to paint over the failures of the Obama-Biden years and his record as U.S. Senator while offering nothing but a continuation of those failed policies,” said PAGOP Chairman Val DiGiorgio. “Even though Joe Biden has emerged as the front-runner in a crowded field of 2020 Democrat Presidential contenders, the more he continues to re-introduce himself to the American public—and Pennsylvania in particular—the more they will see he offers nothing for them but a record dearth of any meaningful success and no real vision for the future.”

Trump is set to hold his first rally of the year in the state in just two days in Montoursville to boost state Rep. Fred Keller’s bid for the 12th Congressional District and promote the GOP party message.

The event staff estimated that there were 6,000 people in attendance at the rally today.