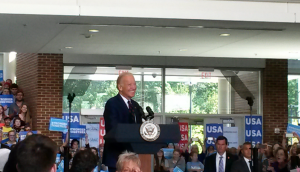 As you have no doubt noticed over the past eight years, Joseph R. Biden is a unique individual.

Biden is perhaps the only public official in a polarized American electorate who is both respected and mocked by everyone.

“No one ever doubts I mean what I say, the problem is I say all that I mean,” he frequently admits.

If you’ve ever read Richard Ben Cramer’s seminal chronicle of the 1988 campaign “What It Takes”, you know why the VP has worked in Washington for decades yet has always been diminished by insiders.

While Cramer’s book is a must-read, however, you only have to attend one of his events to understand Joe Biden.

Most politicians are one of two types. Policy wonks who must adapt from speaking in paragraphs to talking in sentences and naturals who can easily pump up a crowd and deliver a sound-bite.

The Scranton native is more like the person making an argument at a diner or barbecue. Instead of a natural intellect, he is well-read and passionate about making his case.

So he is the perfect spokesman for Clinton in the white working-class areas of Lower Bucks County, which is where the Vice President was on Friday morning.

Speaking in the tiny, crowded lobby of the school’s Bristol campus, Biden only briefly touched on the Republican nominee.

It was obvious early on that the VP wasn’t here to deliver a stemwinder. In fact, I can’t recall another politician who urges audiences not to applaud or boo because he wants them to listen to what he is saying. Countless times Biden would interject “Nah, I’m serious” or “I really mean this” when pressing a point.

In order to back up those points, the VP did exactly what your politically-invested friend or family member would do. He brought up reports he had read and described his own experiences. Unlike the rest of us, though, he’s spent countless hours with world leaders. 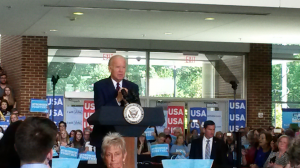 Biden recounted how in the 1980’s he would often argue against those who believed Japan “would eat our lunch”. Then in the 1990’s the European Union became the competition, and in the 2000’s the fear was that China would replace the U.S.

In classic Biden style, he described the advice he gave President Obama after being about his ten-day trip with China’s eventual President Xi Jinping.

“I said he has the look of a man about to take on a job he knows is not going to end well,” Biden related.

“Think about it, China not only doesn’t have enough energy, they don’t have enough water,” he continued as his outrage steadily rose. “They’re talking about $2 trillion projects to turn and reserve the direction of their two major rivers because there’s not enough water for the people.”

“The idea. The idea! That they could compete and own the 21st century compared to us is bizarre. It’s bizarre,” he declared while slamming his fist down on the podium. “But the reason I mention this, is I’m so tired of hearing people, and particularly the opposition, run down America’s capacity, run down who we are, run down what we’re capable of.”

“There’s no other country in our league right now,” Biden asserted.

He continued to present his case using such esoteric topics like stepped-up basis and A.T. Kearney surveys, yet he could and did explain them rather easily.

Biden did return to the subject of Donald Trump eventually, though, saying that every world leader he’s met with has worriedly asked him about Trump except for Vladimir Putin.

Towards the end, Biden attempted to win over undecideds who don’t view Hillary Clinton favorably. Such sentiment was expressed by the RNC in response to his visit.

“After a lackluster debate performance by their VP candidate, the Clinton campaign is throwing everything but the kitchen sink at battleground states this week in a fruitless effort to drum up enthusiasm for an uninspiring ticket,” RNC Spokeswoman Natalie Strom stated. “Unfortunately for them, visits from Joe Biden only highlight the fact that Hillary Clinton is failing to win the hearts and minds of the members of the coveted Obama coalition she desperately needs to turn out for her in November.”

“I know some of you, and some of the people you’re trying to convince, aren’t crazy about Hillary. I know that, I think she’s gotten an unfair deal,” he admitted while maintaining he was hopeful about her chances.

“The reason I’m optimistic is A. I know her heart B. Everybody knows how smart she is and C. We’ve never had a President who’s won by merely appealing to the fears of the American people.”

Finally, the VP invoked the razor-thin 2000 election to prove that every vote matters and encourage everyone to register before Tuesday’s deadline. He finished with a line from his speech at the Democratic National Convention in Philadelphia.