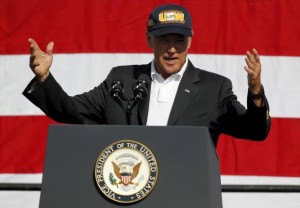 In the wake of the death of his oldest son, Vice President Joe Biden has told potential supporters that he may not have the “emotional fuel” to run.

Today, he went looking for that emotional fuel during a Labor Day parade in Pittsburgh.

Several attendees and journalists asked Biden about his 2016 plans.

“I am gonna run part of the parade,” Biden told CNN’s Brianna Keilar at one point. “I feel like I am home right now.”

Biden mingled easily with the crowd, highlighting the contrast between him and the two main Democratic candidates, the lawyerly Hillary Clinton and the Howard Beale-like Bernie Sanders. It’s clear that unlike his potential opponents, Biden is a true happy warrior who loves retail campaigning.

When the Vice President took the stage, he gladly put on a USW cap and kept it on for his entire speech.

“The only reason I’m standing here is back in ’72 when I was 29 year old kid…I couldn’t get help anywhere…But I won, I won because of the Steelworkers,” Biden said as way of an explanation. “We have an expression where I grew up, you go home with them that brung you to the dance.”

He then thanked those assembled for everything organized labor had given him.

The Vice President went on to contend that through labor America was able to build a middle class that provided the nation stability in contrast to the historical social strife in Europe.

“Folks, the reason I’m always talking about you all, the reason I’m always talking about the middle class is one thing people don’t focus on, they don’t focus on but for the fact that we’ve had a growing and expanding middle class for the last 100 years, we wouldn’t have had the political and social stability we have in this country.”

The VP then stated that this “bargain” had been broken and while it wouldn’t be easy to fix, the solution is simple.

“The first thing you gotta do is you gotta make sure we begin to focus on the things that matter,” Biden stated. “They’ll tell you it’s globalization, that’s a lot of malarkey. Two things have taken place. They changed the tax code and all those things that matter to ordinary people, they got cut.”

While they are all basic ideas Biden has advocated for in his forty-plus years in office, they would also make a convenient campaign platform.

The happy warrior sought to end his speech on a high note.

At that point Biden was implored by a man in the crowd to “run for President!”

“No I’m not — I gotta talk to my wife about that,” was all he was able to reply.

In a way, the moment encapsulated the Vice President’s current reality. The man who loves both his family and politics with such ferror, may have to suffer the loss of his son and his career in just a two year span.

A campaign would be energizing, but likely to only prolong the inevitable.

Still, for Labor Day at least, Joe Biden was the happy (yet reluctant) warrior once more.