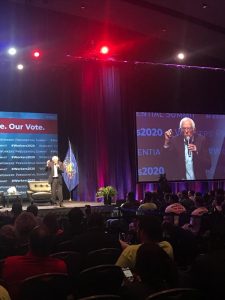 During their roughly 30 minutes of time on stage answering questions from Vernon Odom, a retired reporter from 6 ABC in Philadelphia, they detailed how supporting unions has shaped their political careers, while occasionally taking veiled jabs over policy differences at one another.

Biden played up his Scranton and Claymont roots by saying that most people from his hometowns either joined a union, became a firefighter, or a police officer. He credited success throughout his political career due to early endorsements from labor unions and said that they were the ones who “brought him to the dance.” Biden said union voters know they can trust him due to his decade long career in elected office.

When discussing policy positions, Biden slammed President Donald Trump’s administration for his tax reform bill, promised to end tax loopholes for the wealthy, target Wall Street executives for labor violations, but perhaps the most notable moment came when he discussed his plans for healthcare.

During the most recent Democratic debate, Biden and Sanders laid out their different visions for healthcare, and the former Vice President seemingly took a shot at Sanders’ plan on Tuesday afternoon, while boosting his proposal. 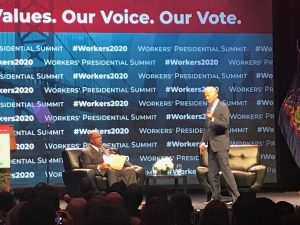 “I have a significant healthcare plan, but guess what?” Biden said. “Under mine, you can keep your health insurance you bargained for if you like it.”

Sanders, who received the warmest ovation of the afternoon, opened up his address by boasting about his 100% voting record with the AFL-CIO and drew a contrast from Biden right out of the gate over several votes taken in the past.

Sanders didn’t mention Biden by name in his half hour on stage, but directly addressed him by name while speaking to the media afterwards when asked about the differences between the two on policy.

“All I wanted to do today was make it clear that in the terms of the needs of working people, I have a record that I don’t have to apologize for,” Sanders said to the gaggle of reporters following his address.

While Biden took aim at Trump mainly over his tax reform bill and other economic policies, Sanders went beyond that labeling the president as a “pathological liar, fraud, racist, sexist, and homophobe.”

This statement drew the loudest opposition to Sanders with one person in the back of the audience repeatedly yelled “you’re an asshole, Bernie” which was drowned out by much louder “Bernie” chants offering support for the 2020 Democratic presidential hopeful’s message.

Biden and Sanders have remained towards the top of national and Pennsylvania centric polling. Biden has been at the top of various Pennsylvania polls, while Sanders and Warren have closely followed the former Vice President. Both Biden and Sanders best Trump in a hypothetical head to head matchup in the state according to an Emerson College Poll from March and a Quinnipiac University poll in May.

Since that polling, Trump has ratcheted up his push for the labor vote in the state. Trump spoke at a Beaver County ethane cracker plant last month touting his economic policies, while he boasted about his trade and border policies in a rally in Montoursville boosting the candidacy of now Congressman Fred Keller (R-Snyder) the day before the Pennsylvania primary. Vice President Mike Pence headlined a state GOP dinner in June echoing Trump’s message and promoted the USMCA trade proposal, aimed at replacing NAFTA, in a visit to Franklin County last month.

The urgency to win these voters over was highlighted by Pat Eiding, president of the Philadelphia Council, AFL-CIO, during the event Tuesday afternoon.

“The time for labor union members to engage, begin educating our fellow union members in this electoral process is now,” Eiding said. “Not January. Not after the primary. Right now.” 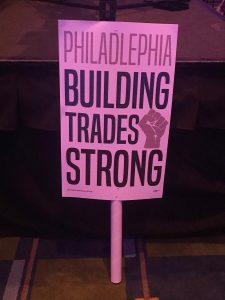 “It’s all happening in our beautiful city of Philadelphia, Pennsylvania,” Eiding continued. “A city and state where workers hold the key to the White House. Make no mistake, the path to the presidency runs through our state.”

Yang largely focused his address around his “freedom dividend” proposal that would guarantee payments of $1,000 per month to all U.S. citizens over the age of 18. He said that the “DNA” of his campaign is in the labor movement and pushed for focusing on taxing the large tech companies, and increasing union membership throughout the country. He also participated in a rally at the Art Museum steps after his address Tuesday evening.

DeBlasio talked about being a “pro-labor” candidate throughout his whole career, saying that despite being an underdog in previous races that his support for unions have helped him get elected to office and help those workers in return. He also rallied against Trump’s USMCA trade proposal, which he described as the “new NAFTA” and called for a “robot tax” that he believes will protect workers from automation.

Steyer touted his record from the previous decade supporting labor unions and talking about his support for impeaching Trump. He described organized labor as his “first, best, and last partner” and said that there has been a 40 year “war against organized labor” that was started under President Ronald Reagan. Prior to his speech, Steyer made multiple stops in Philly, which include a “quick trim.”

Klobuchar pushed her trillion dollar infrastructure plan, her record defending labor as a member of the Senate, and growing up in a union household. She made a promise to not overlook states commonly referred to as “flyover country” and said Trump lied to those voters.

“My view of this upcoming election, the first thing I’ll tell you from my perspective if I lead the ticket, is that I will not be leaving Wisconsin or Michigan or Iowa or Minnesota of Pennsylvania behind at the gas station,” Klobuchar said.

Klobuchar is set to campaign in Pittsburgh on Wednesday, kicking off her three state “Blue Wall Tour.”

The Pennsylvania GOP did not immediately respond to comment from PoliticsPA on this event.