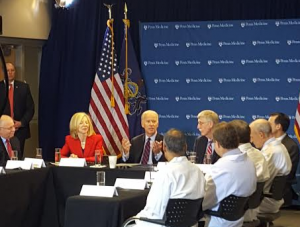 During the State of the Union address last week President Obama announced a new national effort to cure cancer and put Vice President Joe Biden at the head of “mission control”.

On Friday, Vice President Joe Biden kicked off the initiative with a tour of the Perelman School of Medicine and Abramson Cancer Center at the University of Pennsylvania. In a round-table discussion held with doctors and elected officials, Vice President Biden looked to the experts for advice on how to launch his cancer moonshot.

“We’re on the cusp – you’re on the cusp – of some phenomenal breakthroughs,” Biden stated. “In my terms – not your medical terms – we are at an inflection point in the fight to cure cancer.”

It was clear that Joe Biden’s effort to take on cancer research as a national effort is a personal one since his son, Beau Biden, died of brain cancer last May at the age of 46. In the beginning of the discussion, he explained that his efforts will not halt when he leaves the White House as he plans on doing this the rest of his life.

Penn Medicine was chosen by the VP because they have been pioneers in cancer research, specifically immunotherapy, in which a patient’s immune system is used to recognize and fight cancer cells. Biden was quick to explain that cancer is beyond his capacity but he hopes to be a catalyst for the research institutions as he tasks them with finding a cure for cancer within the next five years.

The need for doctors to have full and ready access to data was also discussed. It was explained that while Abramson Cancer Center has access to cutting edge treatment tools, 75% of oncologists don’t have access to what Penn Medicine can provide. It is also especially difficult for doctors that practice in rural communities to get the access they need.

Biden listened to the doctors as they stressed the importance of the ability to store medical data that can be accessed by other researchers to help hasten the search in a cure for cancer.

“The good news about this is that in order to reach the goal you’re all talking about, by definition has to be all inclusive, you can’t reach the goal siloed, focused on one sector or population of the community.”

“It’s about making a national commitment to take all the resources from the United States from every sector and focus on this issue,” Biden added.

The Vice President fervently believes that the United States is on the verge of making a contribution to the world that nobody else can. He ended the discussion by stating, “I’ve never been more optimistic in my life.”