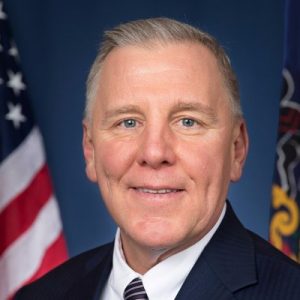 The Pennsylvania Capital-Star was the first to report the news about Blake’s plans.

“It has been an incredible honor to serve the people of the 22nd Senatorial District for the past ten years and I sincerely appreciate the trust and respect placed in my abilities by our voters,” Blake said. “I am very thankful for this opportunity to work alongside Congressman Cartwright as his increasing influence in Washington can translate to more opportunities, more jobs and more federal investment here in Northeastern Pennsylvania to ensure action on the issues that matter most to the families of his 8th Congressional District.”

“I am excited to partner with the Congressman and to move into the next chapter of my professional career,” Blake continued.

It has been an incredible honor to serve the people of the 22nd District for the past ten years and I sincerely appreciate the trust and respect placed in my abilities by our voters. I am very thankful for the opportunity to work alongside @RepCartwright https://t.co/qKB8Kaf6W6 pic.twitter.com/R4zyJujeo0

Cartwright, who was elected to serve as the Chairman of the Commerce-Justice-Science House Appropriations Subcommittee for this session of Congress, pointed to Blake’s 35 years in the public and private sectors handling economic development as proof that he’s a good fit for the position in his office.

“John is a lifelong Northeastern Pennsylvanian and a dedicated public servant with a fierce commitment to creating more opportunity for the people in our area. He is an excellent addition to our team,” Cartwright said. “At the start of this new Congress, I vowed to accelerate my efforts to direct more job-creating federal investments to Northeastern Pennsylvania. With his extensive economic development experience, John will play a big role in this mission.”

Blake said during the press conference that he already decided that he wasn’t going to seek reelection in 2022. He was first elected to represent the 22nd District in 2010 and won by 22 points over Republican Frank Scavo in his most recent reelection bid in 2018.

Blake’s resignation will result in Lt. Gov. John Fetterman selecting a special election date to fill the seat. Sources have said that state Reps. Marty Flynn (D-Lackawanna) and Kyle Mullins (D-Lackawanna) are expected to seek the Democratic Party nomination. According to the Scranton Times-Tribune, Frank McHale, a Scranton Democrat, and Republican Mike Giannetta are also considering seeking their party’s nominations.