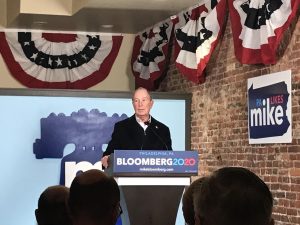 One day after rolling out his first Pennsylvania endorsement and naming former Philadelphia Mayor Michael Nutter his national campaign political chair, Bloomberg opened up his first office in the state on Saturday morning and made his pitch to supporters about why he’s seeking the presidency.

“The question of why I’m running, I get that all the time,” Bloomberg said. “The answer is to defeat Donald Trump and put somebody else in the White House.”

“I think this guy is an existential threat,” he added.

Bloomberg formally launched his presidential bid in November, joining the crowded field of Democratic hopefuls months after their campaigns started. Due to his later entry, Bloomberg has elected to bypass key early states like Iowa and New Hampshire and place his focus on other delegate heavy states, including Pennsylvania.

While making his case for Pennsylvania voters during his 15 minute address, Bloomberg claimed that other candidates aren’t focused on the state, while President Donald Trump is working hard to keep it in the win column.

“You don’t find too many Democratic candidates for president that come here to Pennsylvania,” Bloomberg said. “They spend their time and all their resources in one or two other states, but I will say this, President Trump has been campaigning all over the state.”

All of the leading Democrats have made campaign visits in the state thus far, with the most recent trip for seven of the candidates being last Saturday in Pittsburgh at a public education forum. Former Vice President Joe Biden’s campaign is headquartered in Philadelphia, while Sen. Elizabeth Warren (D-MA) became the first Democratic presidential candidate in the state to begin a field operation.

Trump and Vice President Mike Pence held a rally in Hershey last week that included blasting the Democrats over impeachment and touting the USMCA trade pact, which has been a point of emphasis for the Trump reelection effort in the state.

Bloomberg believes that Trump’s continuous attention to Pennsylvania and other blue wall states is working and that it’s vital for the Democrats to make a huge push to win them back in 2020.

“The cold hard fact is if you look at the polls, this is a guy that’s going to be hard to beat,” Bloomberg said about Trump. “I can’t imagine another 4 years of Donald Trump.”

The Real Clear Politics average shows Trump trailing Biden, Warren, and Sen. Bernie Sanders in the state in a hypothetical head to head matchup, although the most recent Pennsylvania poll from the Morning Call/Muhlenberg College released in mid November showed that his deficit with Sanders and Warren was within the margin of error.

Bloomberg has not been included in these Pennsylvania specific polls included from Real Clear Politics, although a poll released from FireHouse Strategies on Dec 8 showed that Trump was leading all of the highest polling Democrats in the state, but the one within the closest margin to Trump was Bloomberg, only trailing by 4 points, while the largest deficit was Sanders trailing Trump by 10 points. However, Firehouse Strategies is a public affairs firm founded by 3 senior aides on Marco Rubio’s 2016 presidential campaign.

While speaking to a gaggle of reporters after his address, Bloomberg said he believes that Pennsylvania voted for Trump in 2016 over Sec. Hillary Clinton, which was the first time the state voted for a GOP candidate for president since 1988, because they weren’t happy and compared it to election results in Great Britain in 2016.

“Look, people voted for Donald Trump because they weren’t happy with what was going on,” Bloomberg said. “Whether they were right or wrong about that, they were uncomfortable.”

“You saw the same thing, Brexit is the same phenomenon,” he added.

A central theme of Bloomberg’s candidacy, which he stressed in his speech Saturday morning, was that he was running to unite the country, as he views Trump as a divider.

“We need a uniter and I think that I know how to do that and I want the opportunity to do it,” Bloomberg said. “Somebody that can win, somebody that has experience.”

On the policy end, Bloomberg provides more moderate policy proposals. He told reporters after his address that “Medicare for All just does not work” and that he thinks it would never pass Congress. He released a healthcare plan of his own earlier this week that supported a “public option,” which is similar to what the other more moderate Democrats have proposed.

He touted his record as Mayor in New York City tackling a number of issues and discussed his focus on gun control legislation, cutting greenhouse gas emissions, and more as proof that he can pass legislation that would benefit the whole country.

Bloomberg, a billionaire, is self funding his campaign and believes that it’s a sign that he isn’t beholden to special interest. His campaign has already launched television ads in the state and said that his plans to spend his own money is worth the effort to deter Trump from a second term. 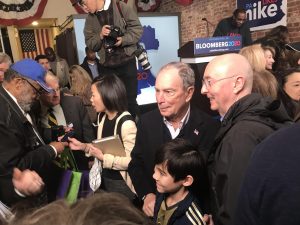 “Someone said to me the other day, ‘oh, you’re spending a lot of money,’ and I said ‘yes, I’m making an investment and spending my money to try to get rid of Donald Trump,” Bloomberg said.

“Do you want me to spend more or less,” he added.

While Bloomberg boasted about supporting 24 Democrats running for Congress in 2018, with 21 of them winning, his gun-control group endorsed Sen. Pat Toomey (R) in 2016 and Rep. Brian Fitzpatrick (R-Bucks) in 2018.

Bloomberg promised that his campaign will focus on the whole state leading up to the April 28, 2020 primary date. Playing into his Pennsylvania connections, he told the crowd that he spoke to former Gov. Ed Rendell, who endorsed Biden, recently calling him a “good friend” even before Bloomberg served as mayor, adding that he believes Rendell “would’ve made a great president.”

He also thanked state Sens. Sharif Street (D-Philadelphia), Anthony Williams (D-Philadelphia) and Philadelphia City Controller Rebecca Rhynhart (D) for being in attendance at the office opening. None of those elected officials have endorsed a candidate for president yet.

Rhynhart told PoliticsPA after the event that although she’s unsure if she’s going to endorse a candidate in the Democratic primary that she “admires” Bloomberg’s record as mayor and in business adding that said she believes that he has the “attributes” to take on Trump and is more on the moderate scale of candidates.