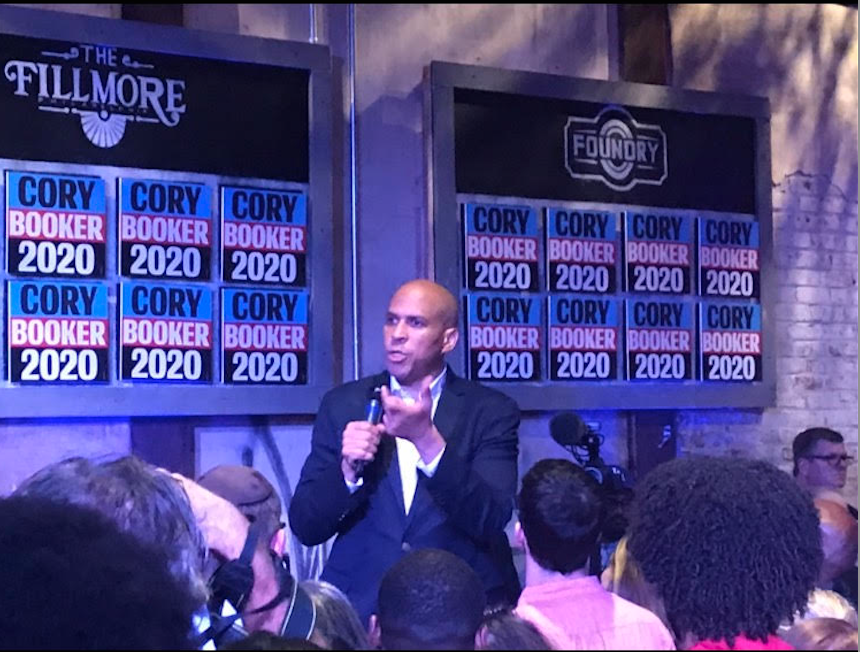 PHILADELPHIA- Hours after delivering a speech at Mother Emanuel AME Church in Charleston, SC about the dangers of white nationalism and gun violence, Sen. Cory Booker (D-NJ) called for healing and focusing on an election he believes will define the culture of the country in his first campaign appearance in Pennsylvania.

“We have to really look at ourselves in the mirror,” Booker said Wednesday evening at the Fillmore in Philadelphia. “We have to understand that this is going to be an election that defines our culture. And not just by what they do or he does, but by how we act and how we treat one another.”

The focus of elected officials and presidential hopefuls alike has been shifted towards addressing gun violence and white nationalism after a weekend in which mass shootings in Texas and Ohio resulted in 31 people dying. Booker released his own plan to “end the gun violence epidemic” in May and re-upped his calls for stricter gun laws in the wake of the two mass shootings last weekend.

Although the 2020 Democratic presidential hopeful didn’t delve deep into his policy positions on Wednesday evening, he often talked about the effects of gun violence in different communities in the nation, including the city of Newark, NJ where he resides, and said he’s running for President to heal the soul of the country.

“This is a time of hurt in this country,” Booker said.

“I was very clear from the day that I launched my campaign on February 1st that I’m not just running because of my policy plans and my ideas, that is really important,” Booker said. “But I’m running really because I’m worried about the soul of our nation.”

The larger focus of Booker’s address was to combat Trump’s rhetoric, who he accused of engaging in “moral vandalism” and “using the same words that white supremacists are now using.”

Although he was critical of Trump using the words “infestation” and “invasion” to describe the condition of some inner cities and undocumented immigrants, Booker said he is a symptom of a larger problem that needs to be addressed in the 2020 election.

The jockeying for Pennsylvania is well underway for the large Democratic field. Booker became the eighth presidential candidate to make a public appearance in the state, according to the Philadelphia Inquirer’s Jonathan Tamari.

Booker, who has polled in 7th and 8th in the crowded field in the state according to polls from Emerson College in late March and Morning Call/Muhlenberg College in April, was critical of Democrats for only focusing on defeating Trump and believes the party needs to aim for more ambitious goals.

“I get confused by my party sometimes,” Booker said. “We poll Democrats, you know what their number one issue is? We just want somebody who can beat Donald Trump. And I’m like we gotta have some bigger aspirations than that.”

He pleaded with Democrats to not let Trump define their ideas, but create solutions for issues like climate change, healthcare, education, and more.

Booker said the road ahead was not going to be easy, but called on Americans to “stay faithful.”

PoliticsPA is seeking comment from the Pennsylvania GOP on Booker’s rally.