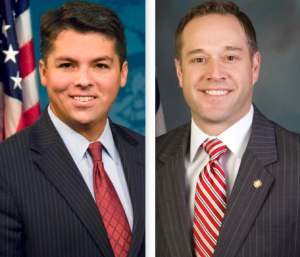 State Reps. Brendan Boyle (D-Phila.) and Mike Fleck (R-Huntingdon) are set to have a happy new year, at least according to Governing Magazine. The periodical dedicated to state and local governments named both men to their list of 12 state legislators to watch out for in 2014.

“This list in particular includes legislators who have shown a keen ability to strike alliances across party lines, or who have racked up significant accomplishments during their time in office so far,” Louis Jacobson, the author of the list explained. “Each of these lawmakers has a compelling personal story that informs the way he or she governs.”

The two State Reps. are opposites in many ways. Boyle represents a part of Philadelphia, is a big backer of labor unions and earned a master’s degree from Harvard’s Kennedy School of Government. Fleck, meanwhile, represents a rural district outside of Harrisburg, is a strong defender of agricultural interests and graduated from Liberty University.

Both men, however, have made names for themselves outside of their district. Boyle is running for Congress in the 13th District while Fleck received notoriety when he came out as gay last year. Pennsylvania was the only state to receive more than one entry on the list.

Here is what Governing wrote about Boyle:

Boyle, elected to the House in 2008, grew up in a Philadelphia row house as the son of a crossing guard and a maintenance custodian who emigrated from Ireland at 19. Boyle, the first in his family to attend college, earned an undergraduate degree from the University of Notre Dame, where he also worked as a sportscaster. He later earned a master’s degree from Harvard’s Kennedy School of Government and worked as a management consultant for the Naval Sea Systems Command and the Military Sealift Command. In the state House, Boyle has styled himself a champion of labor unions. Last August, he gained attention for a bill that would give free tuition at state universities in exchange for a share of future earnings. Boyle has served as chairman of the House Democratic Campaign Committee and recently threw his hat into the ring for a competitive 2014 primary for the U.S. House seat being vacated by gubernatorial candidate Allyson Schwartz. Boyle’s brother, Kevin, also serves in the state House from a neighboring district.

And here is what the magazine wrote about Fleck:

Fleck was first elected to the state House in 2006 from a rural, conservative district west of Harrisburg. An Eagle Scout and later a Boy Scouts official, Fleck earned a bachelor’s degree from Liberty University. His family has farmed and hunted in the district for generations. He’s focused on agriculture and tourism, and has secured bipartisan support for efforts to prohibit privatizing health services at state correctional facilities (his district includes two of them). He has also been very active in seeking to increase oversight of publicly funded charter schools. In 2012, he made headlines when he announced he was gay. After being easily re-elected multiple times, Fleck is now facing primary opposition. “Coming out is hard enough, but doing it in the public eye is definitely something I never anticipated,” he told the Huntingdon Daily News.

This is the second list of state legislators to watch that the magazine has written so far. The 2012 list correctly predicted that Texas State Rep. Wendy Davis, who became famous for her filibuster of an abortion bill this year, was a future political star in the making.