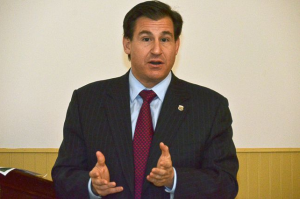 State Senator Larry Farnese has been indicted on thirteen charges.

The story was first reported by Holly Otterbein of Citified.

You can read the full twelve page indictment here.

“Larry Farnese is 100 percent innocent of these novel charges and expects to be fully exonerated. There is no allegation that Senator Farnese misused his office or government funds nor that he accepted any gift or kickback. These charges have no connection whatsoever to his Senatorial office.

Rather, the Senator stands accused of making a contribution from his campaign account to a deserving young student’s scholarship fund in exchange for the support of the student’s mother in a party ward election. The government makes these charges despite the fact that the donation was properly reported almost five years ago; was given some five (5) months before a unanimous ward vote in which the Committeewoman did not even participate; and no other committee person has claimed to have been offered anything of value by Senator Farnese.

The application of federal law to circumstances such as these are not only novel (and what we believe to be the first of its kind), it is also dangerous. The government seeks to extend the reach of prosecutors well beyond accepted constitutional grounds and into areas of purely local party organizational politics.

In an oral argument last month, the Supreme Court questioned prosecutors’ attempts to criminalize well accepted political activity. As the Justices noted, politics in the real world is based on relationships, and public officials routinely advocate and provide support for constituents. That is all Senator Farnese is accused of here — performing a regular and appropriate part of being a community and political leader that the government would now like to be declared illegal.

For those reasons, we expect Senator Farnese’s complete exoneration.”

Farnese has represented the 1st district since 2009. The district consists of Southwestern Philadelphia.