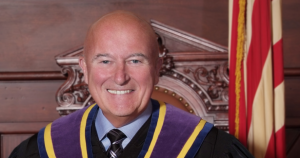 According to Chris Brennan of the Philadelphia Daily News, McCaffery will submit his resignation later today.

This development is the culmination of a tumultuous, month-long, drama-filled episode.

At the break of October it was revealed that Justice McCaffery was among those who exchanged pornographic emails with employees in the Attorney General’s office.

A few weeks later, McCaffery issued a scathing letter that attacked his long-time antagonist, Chief Justice Ron Castille. McCaffery insisted Castille was on an “egomaniacal mission” to bring him down.

Castille was given access to the emails by Attorney General Kathleen Kane after a spirited legal battle.

Then the story took a strange twist when Justice Michael Eakin accused McCaffery of threatening to release inappropriate emails involving Eakin unless Eakin convinced Castille to call off his crusade.

In the wake of all these events, McCaffery was suspended from the Court last week. In an extraordinary opinion, Chief Justice Castille went as far as to call McCaffery a “sociopath”.

Now, McCaffery has resigned and the storm, for the moment, has passed. Castille is also required to retire at the end of the year because of the Court’s age limit (he turned 70 earlier this year). What permanent damage this has done to the Court as an institution, however, is impossible to ascertain.

Update: The Judicial Conduct Board announced it has dropped its investigation.

“If the board were to continue its investigations and institute proceedings against Justice McCaffery in the Court of Judicial Discipline, and if it were to sustain its heavy burden of proof on any charge, the most serious sanction that could be imposed is removal from office and a bar to holding judicial office in the future,” the conduct board stated. “Since Justice McCaffery has retired and has agreed not to seek senior judge status and not to again seek elective judicial office, the board has concluded that it is in the best interest of the judiciary and the judicial system of the Commonwealth to dismiss its investigations into the matters specifically referred to in the Supreme Court’s now-vacated order of October 20, 2014.

“Accordingly, the Board will dismiss its investigations into these matters.”