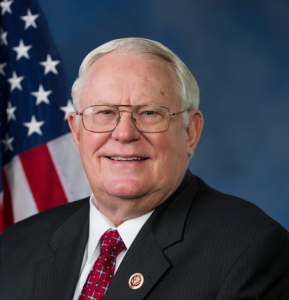 Congressman Joe Pitts is set to retire next year.

The ten-term representative, who began serving in 1997, will not seek re-election in 2016.

“With great appreciation for the support of all those who have contacted me to urge me to run for re-election, I have decided, after prayerful consideration, not to seek re-election to the U.S. Congress in 2016,” Pitts said. “It has been an honor to serve the people of southeast Pennsylvania in Lancaster, Chester, and Berks counties. I thank my constituents for giving me the privilege of representing them in Congress for the past 19 years.”

“As a person of faith, and a follower of Jesus, I believe that we are called to pursue justice and reconciliation, and to be an advocate for those who cannot speak for themselves,” Pitts continued. “I plan to focus my future work on human rights and religious freedom, both domestic and international, as well as on matters of culture and the American family.”

UPDATE: Republican State Sen. Lloyd Smucker released a response to Pitt’s retirement announcement which suggests he is also interested in jumping into the race:

“Congressman Joe Pitts served the 16th District, our Commonwealth and the entire nation with honor and distinction for decades. With Washington, D.C. being known as a place of gridlock, discord and fierce partisanship, the people of the 16th Congressional District were lucky to have a true gentleman representing us in the Capitol who was deeply respected for his honesty, values and views. Congressman Pitts is someone I consider a principled leader and I wish him and his family well in any and all future endeavors.

“With today’s news, many have reached out to me to inquire about my future plans.  I will be making an announcement soon regarding my own political future and, in particular, my interest in serving the people of the 16th Congressional District in Congress. However, today is about Congressman Joe Pitts and we all should be honoring and praising him for the countless years of dedicated, tireless public service he gave our great Commonwealth.”