Breaking: Sestak for Senate (With Video)

Forget the Governor’s race. Former Rep. Joe Sestak said today he’s looking at a rematch with Sen. Pat Toomey. The move instantly makes Pennsylvania one of the nation’s marquee U.S. Senate battlegrounds in the nation in 2016.

In a web video published Tuesday, Sestak, 61, announced the formation of a 2016 Senate exploratory committee: Leadership for a Better America. 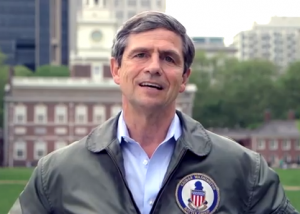 “The U.S. Senate’s lack of leadership and lack of accountability in not confronting our challenges has meant our country careens from crisis to crisis,” he said.

“The Senate needs a leader accountable only to we the people, not any other interests.”

Sestak, the former Congressman and former Admiral, set off a flurry of speculation when he raised $460,000 last quarter seemingly out of nowhere.

After defeating Republican-turned-Democratic Sen. Arlen Specter in the 2010 primary, Sestak lost to Toomey by 2%. 2016 is likely to be a better year for Pa. Democrats across the board.

Update: His spokesman and 2010 campaign manager Mark Harris issued an eyes-forward, standard response to the news.

“Pat Toomey is focused on serving the people of Pennsylvania in the US Senate and hasn’t even thought about an election three and a half years from now,” Harris said. “He will continue working to build consensus and lead in Washington like he has on job creation, fiscal responsibility, and keeping America safe.”

The position, which by its nature cannot be filled by a candidate, explains perhaps why he’s been so careful to avoid declaring himself in the race.