BruceCastor.com, and Other Moves by the Montco Commish 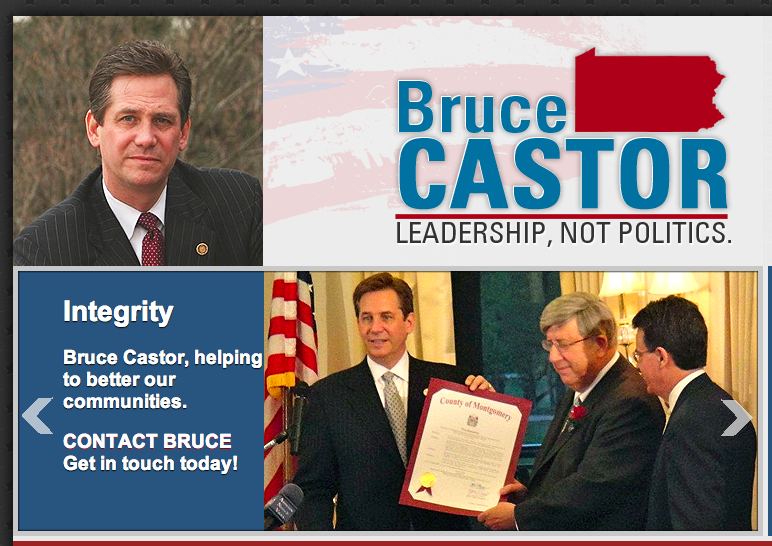 Bruce Castor, the Montgomery County Commissioner who has floated the possibility of challenging Gov. Tom Corbett in the GOP primary, has launched a website. As of this morning, BruceCastor.com is live.

Though only a potential candidate at present – he has said he wants to wait and see what the polls look like later this year before making a decision – he writes like one on his website.

“I will press the Legislature to break the Iron Triangle by restoring the legislative branch to the part-time, term limited body that our founding fathers created,” he wrote.

The site lays out Castor’s vision (for Pa., not Montco), which includes things like eliminating property taxes, enacting right to work, and ending corporate tax breaks. Wrote some well-meaning but insufficiently thorough editor of the site, “(we used the struck through language in another section of the platform, and I think the new language helps alleviate concern that core functions of government would be gutted under your program.”

The website isn’t all Castor has been up to. Castor has been quietly taking meetings with conservatives across the state and attending GOP events. He’ll be at the Lehigh GOP meeting next week, and will host a reception at the conservative PLC get together.

His guide on this journey is Joe Sterns, a former staffer to Sen. Pat Toomey and the group Citizens Alliance for Pennsylvania, and formerly the chairman of the Schuylkill County GOP. Sterns knows the donors and activists who would make a legitimate run possible.

Sterns has also got his fair share of enemies in the GOP, particularly those incumbents he’s helped to challenge over the years. Now he’s Castor’s spokesman.

On any given day, Castor is tweeting and facebooking links to articles about Corbett’s poll numbers (low) and perceived vulnerability (high).

He’s doing his best to deny Corbett the flexibility to moderate as he enters his re-election cycle.

In the wake of NJ Gov. Chris Christie’s decision to opt into Obamacare’s expansion of Medicaid, Corbett has left the door open to following suit. If he does, Castor will pounce. In late January, he staked out the rightmost stance on the issue.

“To expand Medicaid eligibility to 133 percent of the Federal Poverty Level, as proscribed by Obamacare, would be financially devastating for Pennsylvania,” Castor said, and called on Corbett to follow Florida’s example. “Since the Supreme Court gave each state the power to opt out of the expansion, our Governor must exhibit leadership and do so.”

Subsequent to this statement, Florida Governor Rick Scott (R) reversed himself and decided to opt in to Obamacare. But Castor’s opposition, and that of a number of Pa. conservatives, remains.